Cowboys in the Distance

Posted on by Andrew Weeks

Spooky Life on the Oregon Trail

Story and Photos by Andrew Weeks

Four years ago, when I first visited Stricker Ranch, formerly called Rock Creek Station, I had no idea it would become one of my favorite places.

Since that first visit, I’ve returned many times to the property, which lies along the Oregon Trail about six miles south of Hansen in Idaho’s Magic Valley. I always enjoy imagining the history of the area, walking the trail, and talking with the caretaker, Gary Guy.

On a sunny but chilly day in early winter of 2012, Gary agreed to answer questions for a book I was writing about purported hauntings in the area. By then, we met as friends. I had heard stories about the old-style ranch house being haunted, and one of the first questions I had for him was if he had experienced anything paranormal while living there. Gary, who has a white beard and was wearing a light jacket that day, quickly confessed that he was a skeptic, but yes, something had happened that he couldn’t explain: shower curtains had moved of their own accord. 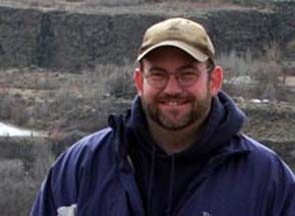 Andrew Weeks is an award-winning journalist and the author of several books, including Haunted Idaho: Ghosts and Strange Phenomena of the Gem State and Ghosts of Idaho’s Magic Valley: Hauntings and Lore. He writes near the Snake River in Twin Falls.
View all posts by Andrew Weeks →