My Hometown, All the Way

As I dropped down off Highway 95 into Culdesac for the first time in June 2004, what I saw made me wonder if Norman Rockwell had set up his easel behind me. A rural town with American flags lining the street in front of a hillside of bright yellow fields stirred this Iowa country boy’s heart.

For my wife, Sharon, it was a homecoming of sorts. Although she had been raised in Moscow, her father had settled in Culdesac and started a second family many years before. A civil engineer and architect, Herbert Dunham was also an earth house enthusiast and had selected a hillside in Culdesac to build a home. Sharon had visited her dad, his wife Kathy, and her half-sisters Janet and Julie many times. An invitation from her sisters had brought us here this day to witness the annual Shebang Days celebration.

Culdesac, situated at the bottom of a canyon leading up to the Camas Prairie in north-central Idaho’s Nez Perce County, was founded in 1902 by Charles S. Mellon, president of the Northern Pacific Railroad. Supposedly, he was checking out a proposed route for his railroad and saw this area as the end of the road—a cul-de-sac—because it butted up to the canyon and had no outlet. He suggested the term as the name for a town on this site.

But in the 1860s, before Culdesac was a townsite, the area was considered a “shebang.” At the time this was a word for a hut, tent, or a place established by outlaws for their headquarters. Some think it was derived from the Irish word “shebeen,” a house that sells liquor and is regarded as slightly disreputable. In any case, as miners made their way along the Nez Perce Trail to Lewiston from the goldfields farther east, robbers here relieved them of their gold. 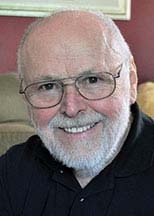 Larry Abele was born and raised in rural north-central Iowa where, after University of Iowa, he was a studio photographer before making his way to Washington state, working in quality control for Boeing, as a photo-journalist with Fournier Suburban Newspapers, and as a publisher for a large church in Tacoma before retiring to Culdesac.
View all posts by Larry Abele →
ORDER BY MAIL