Posted on by Jessi Roberts

A Down-Home Mom Goes to Town

By Jessi Roberts with Bret Witter

In her new book Backroads Boss Lady, New Plymouth resident and mother of four, Jessi Roberts, describes how economic adversity prompted her to start a clothing and accessories shop called Cheekys that she turned into an e-commerce and wholesale manufacturing business, which now employs thirty people and whose items, carried by forty-five-hundred stores, generate millions in annual sales. Following are several excerpts from the book.

Payette County, Idaho, is an hour northwest of Boise along Interstate 84. For the first twenty minutes of that trip, the drive is through suburban communities, with the steep desert mountains known as the Boise Foothills off to the right. Past Caldwell it becomes rolling farmland—mostly the deep green of sugar beets up against the dry sagebrush of the high plains—and then eventually the scrub prairie of the open range. The Bureau of Land Management land is green in the spring but yellow most of the year, and empty except for the occasional herd of cattle local ranchers have paid the government to let them graze. On the left, it’s rolling land forever, without even a tree; on the right, the mountains are like cliffs, rising a hundred feet to a flat plateau, with the jagged purple peaks of the northern Rockies in the distance. It’s beautiful, but for me the most welcome sight is the small turbine power plant that comes suddenly into view, alone on the range at the top of a long rise, because from there the road dips down into the Payette Valley, the first place in my life I’ve comfortably called home.

The Payette Valley consists primarily of small farms crosscut with canals leading from our two local rivers, the Payette and the Snake. The valley used to be covered with apple orchards; now it’s mostly cattle ranches, dairy cows, and field crops. No potatoes (that’s eastern Idaho), but plenty of corn, peppers, pumpkins, and onions, along with alfalfa fields sprouting blue flowers in the fall and bright yellow mustard and canola fields and the sharp green mint that make the valley smell like breath freshener when it’s cut. Payette is the biggest town in the area, with seventy-five-hundred residents. Fruitland, with a population of forty-five-hundred, is the fastest growing . . . I like Fruitland. They’re country like the rest of us, and they have my favorite coffee shop. It’s a drive-through window connected to a garden center. Half the population in the valley is Mormon, and Mormons avoid caffeine. For the rest of us, coffee is life. 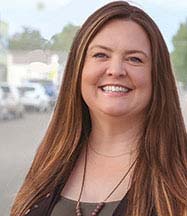 Jessi Roberts lives with her husband and four children in New Plymouth, where she founded the nationally known retail company, Cheekys. Bret Witter, who lives in Georgia, has coauthored eight New York Times bestsellers.
View all posts by Jessi Roberts →