Posted on by Andrea Scott

A DIY Response to the Pesky Rodent
By Andrea Scott

I don’t know that anyone wakes up one day and says, “I’m going to be a gopher trapper.” I certainly didn’t.

I had gophers in some of my pastures farther out from the house, but there weren’t many mounds and holes, and I’ve always been one to try to live within nature rather than dominate it. Then one day, a hole appeared right by the front door. If it had been to one side, I might have lived with that. It was smack in front of where I walk every day.

I called a gopher trapper, and he said he’d come out. Well, a few days turned into a week, and I called him and he said, oh, he’d get there soon. Soon turned into two more weeks. This time when I called, I raised the urgency a bit. He responded, and when he got there, apologized, and said, “Man, I’ve been swamped, I’m sorry.” I was a bit irritated, and said, “I’m sure of that. It’s February.”

He explained that gophers never hibernate like most people think and, yes, he actually was quite busy. One of the things I loved about Don right off was he had a great laugh and was just darn likeable. I followed him as he explained that this was definitely a male gopher and that you can tell because they usually burrow in straight lines looking for romance. Female gophers, he said, create burrows in circles. Both sexes are highly territorial. 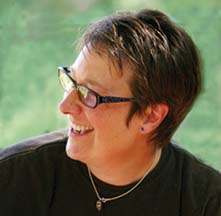 Andrea Scott is an Idaho native who grew up on a large cattle ranch. She is working on a book of photographs and essays documenting Idaho buckaroos of the Great Basin, which encompasses parts of Oregon, Nevada and Owyhee County in Idaho. Andrea’s photographs and writing have appeared in magazines and newspapers throughout the Northwest. Her work, Women with Scars, was exhibited at DIA Art Foundation’s Printed Matter in New York. She was awarded a 2011 Idaho Commission on the Arts Apprenticeship to study the making of horsehair rope-making.
View all posts by Andrea Scott →
ORDER BY MAIL