Handing Down the Guns

The Firearm As Tool

In the years of this story, from 1910 to 1950, in Arco and elsewhere in Idaho, guns and shooting were part of our everyday life. Not a large part, but nonetheless important. Our family’s functioning and prospering in its rural life demanded access to the proper tools, such as farm equipment for growing and harvesting crops. We needed firearms to protect livestock and crops from predators, as well to provide meat for the table. The guns we owned and used were tools appropriate to those ends.

Dad was compulsive about gun safety. From our earliest years, we were taught care for weapons and rules of safe behavior in handling them. We were never to engage in careless action, and we were indoctrinated with the certain knowledge that the gun was always loaded.

I’ve been the custodian of those guns, and have acquired others over time. I’m now age ninety, and as I prepare to hand Dad’s guns to other, younger family members, I’d like to offer background on the history of those guns: how they came into the family and how we used and enjoyed them.

From the time my grandfather George “Pa” Sutton and his family arrived in Arco in 1906, his sons hunted, including my dad. Later, as my elder brother Ladd and I grew up, no stories about hunting or casual plinking [target shooting or killing small pests] were handed down. Dad seemed to think those activities were matter-of-fact, not worth mentioning.

Dad owned three guns that he had acquired as a young man: a twelve-gauge slide action shotgun, a carbine, and slide-action .22 rifle. Ladd and I grew up using those guns as we shot pests and game: ducks, magpies, gophers, snakes, rabbits, pheasants, sagehens, and deer. We both enjoyed hunting, and there were frequent brotherly battles over who got to use the slide-action .22. So in 1940, Dad sat us down with the Montgomery Ward catalog, telling us to pick out another .22 rifle—but not an automatic that ejected cartridge shells as each was fired. He reasoned that this type of gun would make us careless. We’d be tempted to fire fast but inaccurately. The outcome was a bolt-action .22. I usually ended up using it for small game and varmint hunting while Ladd pre-empted the slide-action. Dad also used the bolt-action when slaughtering hogs or beef, and occasionally shot rabbits with that gun.

Dad had obtained the slide-action .22 in 1921, when he helped to remodel Bud Peterson’s house in Arco. Money was tight for Bud, who negotiated with Dad to take part of the payment in the form of the rifle. He explained, “I never was able to hit anything with it.” 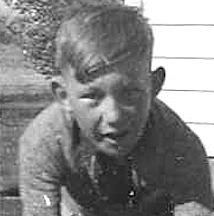 Dwight Sutton grew up in Arco. After service in the Korean War he completed a career in scientific research followed by retirement to a small farm on an island in Puget Sound. In his late eighties he took up writing that focuses on values and experiences acquired during those formative years in Arco.
View all posts by Dwight Sutton →
ORDER BY MAIL