Hanging in the Balance

Posted on by Connor Stewart

In the evening of July Fourth this year, my brother Christian and I reached the top of a small plateau beside the iconic Balanced Rock in Twin Falls County.

We spent about fifteen minutes waving and making silly gestures to our family before my brother decided to descend, leaving me alone atop the giant’s enormous stone pulpit. Even as the sun began to set and the chill of the rains drew near, I felt no urgency to remove my eyes from the vast desert landscape fifty feet from my toes. As the air around me grew still, I diverted my attention from the jagged rhyolite walls that enclosed the monument like an enormous, charred cathedral to the faint outline of a mountain range far off in the Nevada wilderness. Much closer were the lush fields of Castleford, which loomed like an oasis at the edge of the sun-soaked basin. 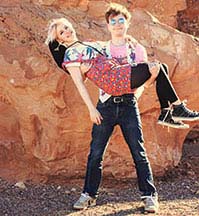 Connor Stewart is a student at the College of Western Idaho, where he has worn a number of hats, including nonfiction editor and layout artist for Basalt Literary Magazine, student research assistant for a monarch butterfly conservation project, club representative for biology, natural sciences tutor, web designer, and science writer. He lives in Boise with his wife, Grace (shown here), a freelance photographer who took the pictures for the story in this issue, and their nine-month-old son, Finley.
View all posts by Connor Stewart →