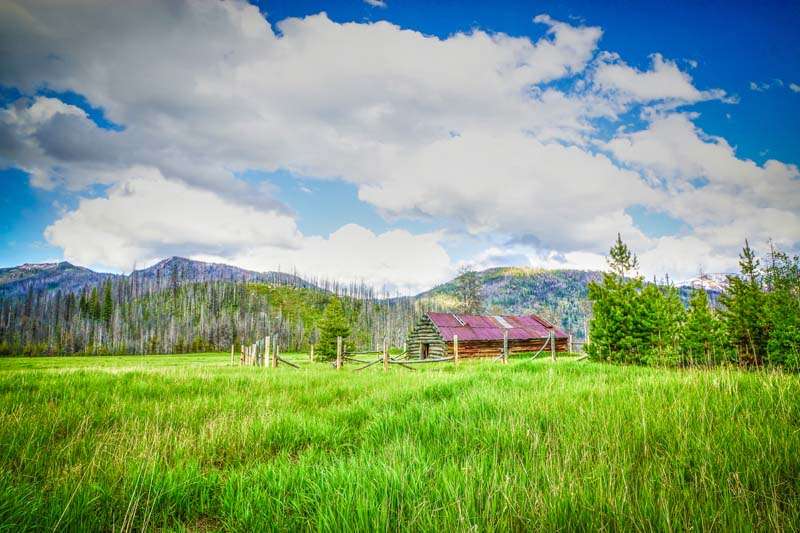 One Ghost Town Leads to Another

Story and Photos by Evan Jones

In search of the ghost towns of central Idaho, I have spent a lot of time over the last ten years driving down gravel forest roads, fording creeks or boggy pastures, slipping through the snow, putting my four-wheel drive vehicle to the test.

My wife and kids have grown to love these trips as much as I do, though they may tell you differently. They might joke about the time I got us stuck in Florence and had to leave the women and children with the reintroduced wolves while I got a ride back to town (for three hours) to get a big enough 4WD to pull us out.

They might complain how their backsides often hurt from riding down rocky paths all day long, or recall the time we had to change a tire on a rocky, steep incline (in the rain) on the way to Yellow Jacket, but I think they also would have to admit that these are unforgettable memories.

One year, we camped in McCall and the next day drove on back roads toward Roosevelt, in the very remote Thunder Mountain mining area. After the mining in Roosevelt slowed down, a mudslide on May 31, 1909 blocked Monumental Creek and turned the town into what it is today, Roosevelt Lake. By then, only a few year-round residents remained, and they left. I’m told from the shores of the lake you can see the logs from buildings, and on a clear day you can see outlines of the structures on the bottom.

This intrigued me ever since I found out about it some time ago, but I didn’t account for how long it would take to get there. Before we made it to the lake that day it started getting dark, and we grudgingly turned back to camp. 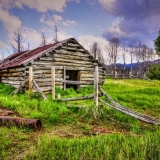 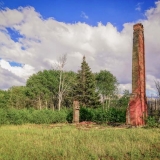 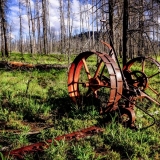 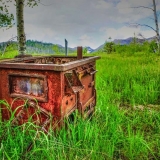 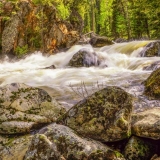 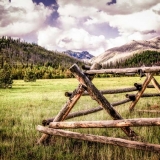 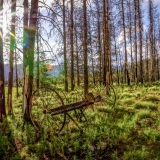 A structure still in reasonable repair in the ghost town of Knox. 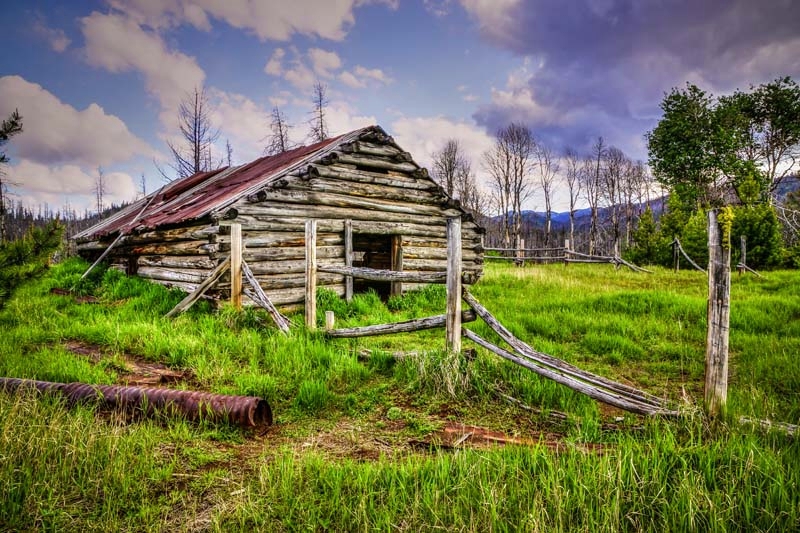 Remains of the hotel at Knox, near Warm Lake. 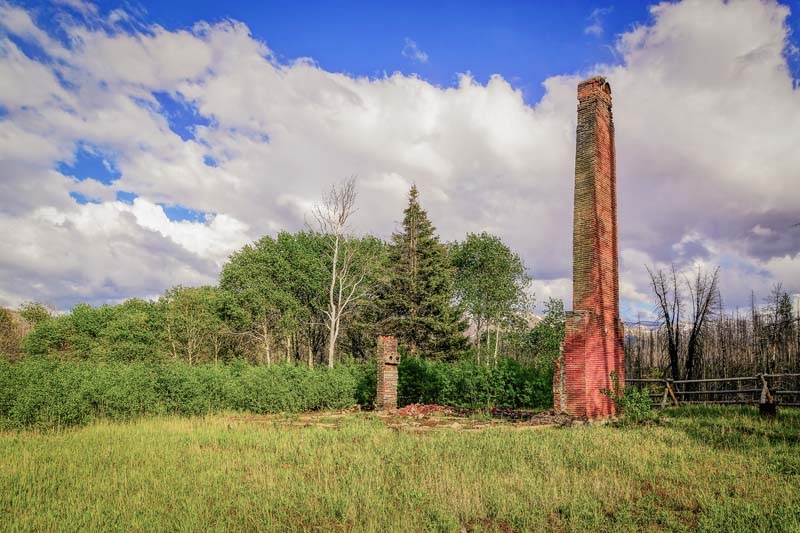 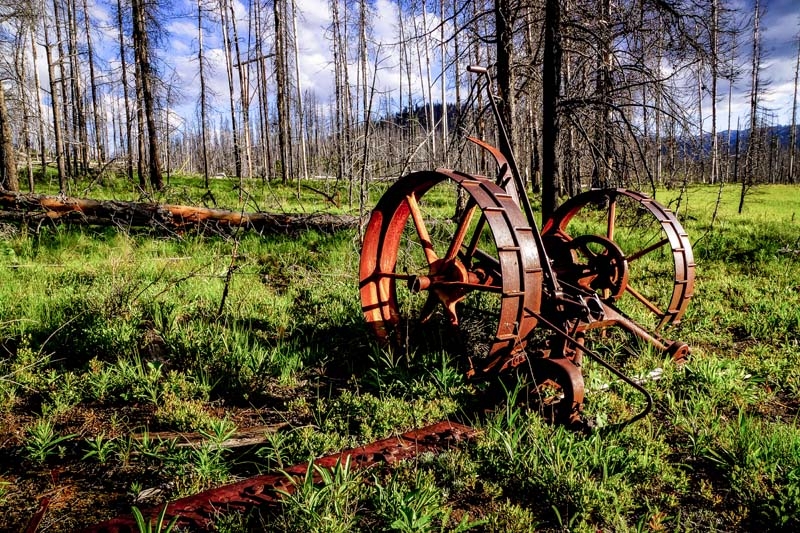 The ghost town's meadow, near Warm Lake, is strikingly lovely. 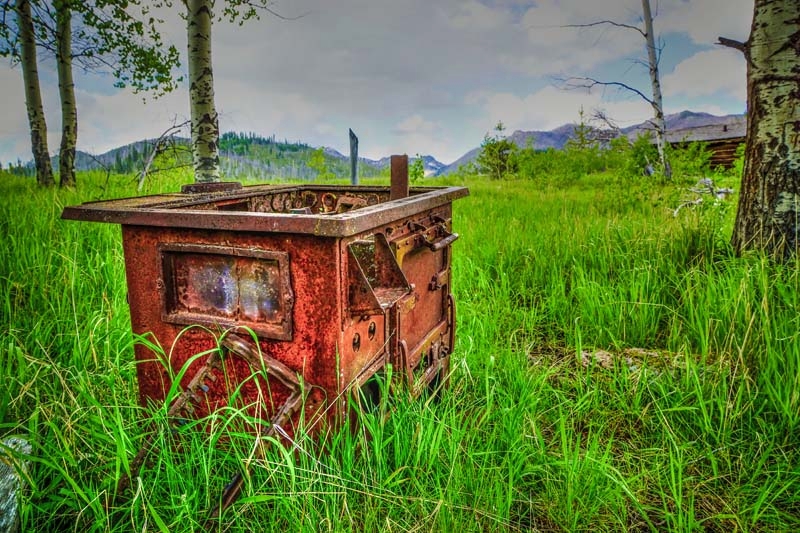 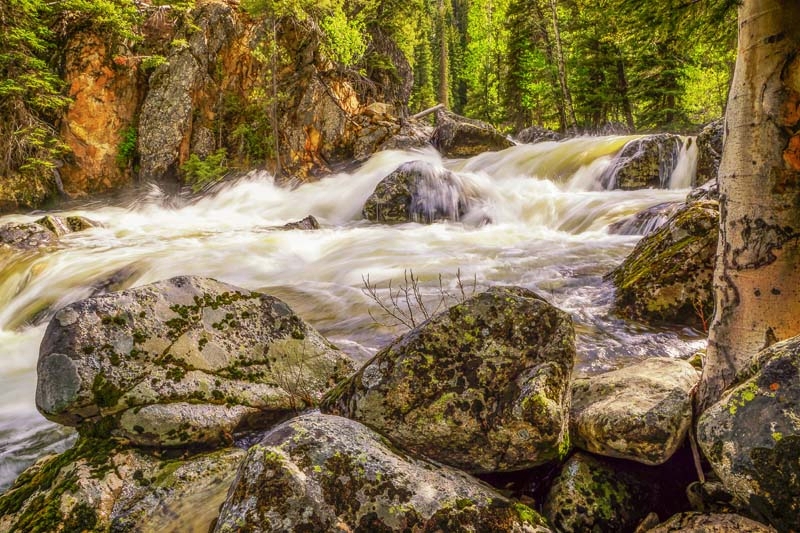 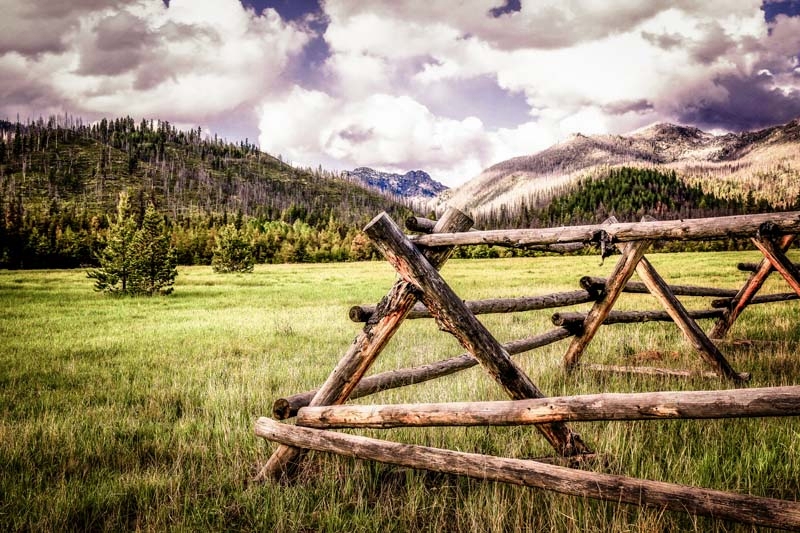 Old farm equipment now blends into the scenery at Knox. 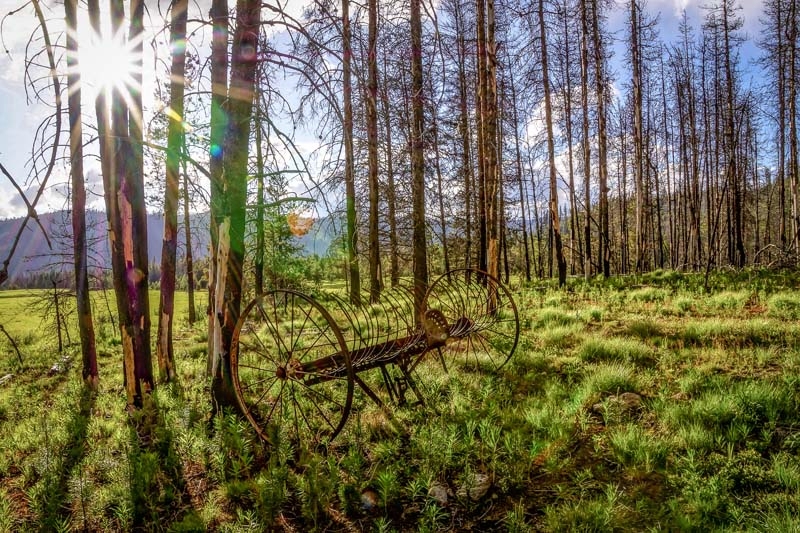 This spring, I decided it was time to finally make it to see this lake. I prepared by bringing a chainsaw, shovel, and tow straps, just in case. Only two of my children had the honor of taking this trip with me, Aaron, thirteen, and Cassidy, five, perhaps because they were the two youngest and still didn’t realize the trouble Dad could get them in. We stocked up the trailer and left for Warm Lake, which was a lot closer than McCall to our elusive destination.

At the campground, we told the host about our bold plans for the next day, and he mentioned a town-site just around the corner that I had never heard of. This was quite an accomplishment, for I thought I had at least read about most of the mining towns in the area, if I hadn’t visited them personally. I was surprised by the news, but I was still going to Roosevelt first.

The next morning, we arose around dawn and drove for a couple hours to Yellow Pine, where the locals didn’t have much faith in us making it all the way to Roosevelt, because of lingering snow. In my usual spirit of adventure, I decided we would prove them wrong. After all, I had meaty tires on the truck and a can-do attitude. We drove for quite a while and eventually came to Stibnite, where a huge pit is still being mined. Our truck hugged the skinny ridge above the pit.

Far below us, a company helicopter hovered over a stream. Beyond the mine site, we found old ruins to have lunch. I took pictures and we discussed what it must have been like to live in such a remote area in the early 1900s. Then we climbed back into the 4WD to get to the lake.

I felt positive about our chances of making it there. All the snow around our house in Grangeville had melted off, and we had experienced good weather for quite some time. Grangeville isn’t all that close to Roosevelt, but I figured the locals probably didn’t go up to the lake much, so they wouldn’t realize that the road was probably open now. Everything was fine, until we climbed to 7,500 feet and on a shady corner, found a one-foot-deep snowdrift. I had the shovel, I was prepared, so I decided to try to make it through.

It took a couple of attempts, but we plowed through the drift. Victorious, we traveled on, thinking how silly the naysayers were. Then we came around a corner to a bigger drift. Time after time, we valiantly tried to ram through this one, but failed. We were blocked. I couldn’t believe it. Once again, I had been foiled in an attempt to reach my most-desired ghost town destination. We backed down the tiny forest road to a place we could turn around and return. I still got some cool pictures, but we were really disappointed about the failed trip.

When I am roaming around one of these mining towns, I often consider how in just a century a town can disappear and nearly be forgotten.

We arrived back at Warm Lake shortly before sunset and decided to go check out the town-site around the corner. We were so glad we did. It was one of the most beautiful meadows we had ever seen. Though many of the structures had been destroyed by a wildfire, several very interesting ones remained. We walked around the expansive, grassy meadow enjoying the wildflowers, the mountains in the distance, and the rustic western scenery before us. We heard birds and crickets on the light breeze, and it was gloriously peaceful.

We couldn’t find any interpretive signs to read, so I had to look up the name and information about this town when we got back to civilization and Internet access. Though I searched diligently, I could not find much information except for the name, Knox.

Months later, on a trip to Boise, we visited the State Historical Society archives to search for more information. I found a thin folder with an evaluation of the site by a Boise Ranger District forest archaeologist named Mary Wilson, and a letter to her from Frank Forbes, who lived and worked in Knox in 1935. According to Wilson, Knox was first claimed as a homestead in 1909 by Charles C. Randall, who had had a mining claim there since 1898. Like many who had not had great luck mining, he instead made money by operating as a supply station for the miners on their way along the rough wilderness roads to the Thunder Mountain mines.

He operated a hotel, store, and livery stable in the town of two hundred. Advertisements in the Roosevelt newspaper boasted that Knox was “the largest station on the line” with “commodious Hotel, Meals, Lodging, Post Office and Bell phone.”

Randall left the area around 1912, and Daniel A. Robnett filed a new homestead entry but, like Randall, he never applied for the patent. In 1918, Daniel G. Drake applied for a homestead and was granted a patent in 1922. He operated the lodge in Knox which, according to the patent survey of 1921, contained seventeen beds, three stoves, and enough place settings to feed forty people. From 1929 until 1946, Knox had another owner, Benjamin H. Seward.

In the summer months, he used Knox as the headquarters for his outfitting operation and in the winter he delivered mail into Yellow Pine by dogsled. In 1935, Frank Forbes worked for Seward there. One of his chores was “to feed a number of the mongrels that he (Seward) used as a dog team in the winter.” Forbes also relates that although he was six-foot-one and weighed two hundred pounds, “Ben Seward was a much larger man than I, and I can certainly state Ben was a big and powerful man. He was very adept with a broad-ax, and I have seen him use the same in squaring logs for use.”

From 1946 until 1976, Knox was used seasonally as a private residence and thoroughbred horse ranch by the Charles R. Reineke family. After the passing of Charles and Constance Reineke, their daughter Ramona sold the ranch to the Hoff Lumber Company in 1976. Two years later, the lumber company traded the ranch to the Forest Service, which continues to keep it open to the public.

Although there had been as many as thirty structures and a couple more down the road in an area Randall called “Hard Knox,” which he used as horse stables, only a few buildings remain today. Slowly being reclaimed by the earth, they still serve to remind us of the ambitious and rugged men and women who chased their dreams and pioneered the area.

When I am roaming around one of these mining towns, I often consider how in just a century a town can disappear and nearly be forgotten. Take Florence, for instance, which at one point had more than ten thousands residents and now is occupied year-round only by those buried in the cemetery. Such thoughts remind me of the importance of investing time in my family and making memories with them, because those memories will last much longer than anything we build or any wealth we amass.

It looks like it might be next year before I get to Roosevelt, because of our short Idaho summers and the busy one I’ll have this year. Next time I go, I hope to drag the whole family along. And you can bet we will stop by to see Knox. 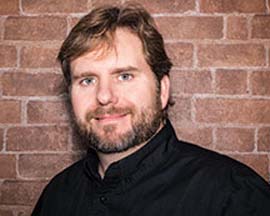 Evan Jones and his wife Holly have five children and own the Subway Restaurant in Grangeville. Evan, who holds a degree in hospitality management from Lewis-Clark State College in Lewiston, has been studying photography for eight years. He has a special fondness for old buildings and vehicles. To see many more of his images, visit www.facebook.com/evanjonesphotography.
View all posts by Evan Jones →
ORDER BY MAIL