In the Hands of Another Ernie

What I mainly remember about Silver Creek is the cow pies and the muck.

But I also remember the luminescent, lime green of the hills that surround this meandering, spring-fed creek just outside Ketchum, made famous by Ernest Hemingway. I remember the early summer sun, high in the blue morning sky. I remember the heat on my shoulders. I remember the birds (I lost a few trout that day because of my affinity for bird watching). I did catch a few respectable trout, rainbows, twelve to fourteen inches. I remember admiring them, the sun sparkling off their sides, as I released them back into the cold, transparent water, as I always do. I remember the water—shallow, slow moving and as clear as the cold vodka that we would later drink in a toast to Papa Hemingway.

When I was a child, my parents lived in Sun Valley for a brief time. I don’t remember it. My father, Ernest (coincidentally) was a PR man back then and he somehow ended up meeting Hemingway (his boyhood hero) at a function one night. He asked Hemingway to autograph his new book, The Old Man and The Sea. The inscription on the inside flap reads, “From Ernie to Ernie.” I remember reading that book as a kid. I remember Spencer Tracy, as the Old Man, in the movie. 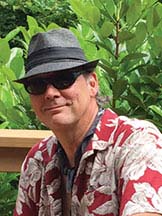 Jeff Beyl has published in national magazines about music, surfing, and nature. He has traveled widely through Asia, Australia, the Caribbean, Europe, and the Mediterranean. He is a jazz guitarist and a devotee of music, poetry, photography, nature, scuba diving, and fly-fishing. Jeff lives in Seattle.
View all posts by Jeff Beyl →
ORDER BY MAIL