Posted on by Jay Karamales

The tall young man reined his mare to a halt on the dusty track. “Heiss!” he muttered under his breath, lapsing into his father’s native Bavarian-accented German, which the young man didn’t speak much himself anymore. He had experienced hot days since leaving New York months before—first in California, looking for gold, and then working odd jobs in Oregon. But nothing like this heat in godforsaken southwest Idaho in the summer of 1862.

He pushed his hat back and mopped his forehead with a handkerchief, but it came away mostly dry. Here in the high desert, he was learning that sweat evaporated so fast, all you were left with was salt-rimed hat, clothes, and skin. Which reminded him to drink more, so he took a pull of warm water from a canteen with his initials scratched on it: “P.L.S.” His given name was Philip Schick, but his friends all called him “P.L.” Scanning the brown, sagebrush-dotted hills and seeing no trace of his missing oxen, he spurred his horse slowly forward.

He and his partner, George Banker, were so close to their goal, it was frustrating to waste time like this. They were leading a wagon train of supplies from Lewiston to Fort Boise. So many miners were flooding into the area following news of a gold strike in the nearby mountains—there was even a new town a few miles to the east, called Idaho City—that the few farms and ranches nearby couldn’t feed them all. Much of the food, and almost all the clothes, tools, building materials, and other supplies had to be brought in from faraway Oregon or Utah along primitive roads like this one. P.L. and George stood to make a good profit when they got their wagons to Boise. They had camped south of Horseshoe Bend the previous night, and today were headed down the long slope into the Boise River Valley, but one of the oxen teams had wandered off in search of fresh grass, and they couldn’t get moving again until P.L. rounded them up. 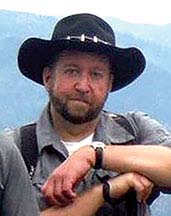 Jay Karamales is a software engineer, military historian, and cartographer who lives with his wife Maureen and their two dogs, Tycho and Baldrick. He is the co-author of Against the Panzers and enjoys reading, hiking, good scotch, bad movies, and video games.
View all posts by Jay Karamales →
ORDER BY MAIL