Posted on by Anna Sermon

And the People of the Little Lost River Valley

The wind in Howe often blows from the west, as it did on October 18, 2012, when the dance hall-bar-restaurant and the store, storage barn, and a log home burst into flames. Every timber in every one of those buildings was well more than a hundred years old. Wind and flames cremated the buildings and nearby trees, but memories don’t burn or blow away. We needed closure, we needed something. I decided the remedy was to travel up and down the valley to collect the memories of community members. I presented them in a 126-page book titled, Gone but not Forgotten. The following story includes some of those memories, like this one: the time out-of-towners came into the store upset because they had just met a little girl bicycling up the road with a rattlesnake wrapped around the handlebars. My book served, and still serves, as a celebration of life in Howe.

They say people make a town and that is surely so with Howe. The people who made and make the community come from as far as fifty miles from Howe, which is on Highway 33 near the bottom of the Little Lost River Valley, bordered on the east by the Lemhi Range and on the west by the Lost River Range. In 1879, D.B. and E.R. Hawley were the first white settlers here. D.B. put down roots at the mouth of the Little Lost River where it disappears into the earth a few miles south of contemporary Howe. His brother E.R. settled about fifteen miles up the valley on the banks of Badger Creek, close to where the creek empties into the river.

D.B., who had a son from an earlier marriage named Merton, then married Marion Kay of Medicine Lodge, which was near what is now Dubois, and Merton married Marion’s younger sister Jane. They built a second house that served as a home, post office, and store with a nice upstairs dance hall. Wooden pegs were used instead of nails and the logs precisely fit together. The building, which is still standing and in good shape, is now used for storage.

After a time, a man came and asked if he could put up a saloon nearby. He was told, “No, we don’t want that kind of activity by our place.” Mert granted him a space up on the hill, and that was the beginning of Howe’s permanent location. Maggie Webb, the daughter of D.B. and Marion, says when the men went to the then-Alturas County seat in Hailey to secure a name for the new community, they asked for “Hawley” but were refused because it was too close to the name “Hailey.” The group decided to put suggested names in a hat and “Howe” was drawn. It was the last name of a sewing machine salesman there at the time. 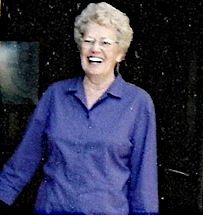 Anna Sermon is the great-granddaughter of John Kyle, the third settler in the Howe area. Born and raised in Howe, she currently lives in the house that was built in 1906 on the original homestead. She is one of two remaining descendants in her generation of the permanent settlers.
View all posts by Anna Sermon →
ORDER BY MAIL