Posted on by Joe Ruffing

The Thrill of BASE Jumping

Story and Photos by Joe Ruffing

A spectacular summer day was brewing in Twin Falls in June 2013 when I bought a video camera to film a musician friend during his live performances. He wasn’t playing that day, but I was anxious to try out my new camera, and looked around for something to shoot.

I was near the I.B. Perrine Bridge and decided to hike over and take a look, as I’d heard about people jumping off the bridge for fun. I spotted a couple of fellas on the lawn next to the Visitor’s Center, who had colorful cords and what appeared to be parachutes strewn on the grass. They were busy working them into small bundles. Rather timidly, I approached and asked, “Do you mind if I video you?”

“Sure, we don’t mind,” said one fellow, who seemed to be a take-charge type.

I turned on the camera and asked, “Did I hear you say that you were going to do some kind of unsecured pack jump?”

The take-charge guy immediately gave an impressive interview. He invited me to video him jumping over the next two days, and my new hobby of filming BASE jumpers was born. 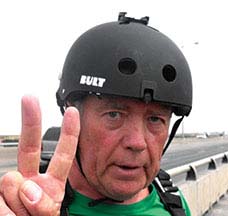 Joe Ruffing travels around Idaho videoing interesting events. His primary interest is BASE jumping, although he also films other activities such as whitewater events, bands and music festivals, nature, fishing, and hunting.
View all posts by Joe Ruffing →
ORDER BY MAIL