Posted on by Les Tanner

Story and Photos by Les Tanner

This story is offered free in its entirety for the first part of May.

This is about a cat. Just an ordinary cat. He hasn’t performed any heroic acts. He doesn’t have any special talents. He is like almost every other house cat on the planet, with a mind of his own and an (apparent) utter disdain for us of a non-feline species.

So why write about him?  Maybe the following will help explain it to you. And to me, too.

My family and I have had pets of one sort or another for as long as I can remember. Most were dogs and cats, with not-very-clever names like Pal and Mitzi and Teddy and Betsy and Tippy and Mollie and Niki and Scarlet. There were a few exceptions, among them a hamster named Hannibal and a tiny white rabbit that my brother named Man o’ War. We even had a couple of horses once, Penny and Trailer, but they weren’t really pets.

As is true about cats and dogs—and hamsters—we usually outlive them, and their loss can be akin to the loss of a family member. That’s true, I guess, because so many are family members in one way or another. We feed them, we provide them shelter, we take them to the doctor when they’re sick, we worry about them when they go missing. We talk to them, too, just like we talk to our kids. They don’t listen, either. Just like our kids.

It was not until we lost our little poodle, Tippy, whom we’d had since she was a puppy, that cats became part of our home. First was Mollie, then Niki, then Scarlet. Each had her unique personality and quirks and behavior patterns. Mollie was “The Climber,” Niki was “Miss Cool,” Scarlet was “The Wanderer.” Each in her own way worked herself into our hearts. All are gone now, leaving gaps that will never be completely filled.

“Anybody here want a kitten?”

The speaker was Kevin, then the manager of the Idaho Athletic Club facility here in Caldwell. His audience was several of us guys relaxing between racquetball games.

“No, thanks,” was the universal response. On my part, we already had Scarlet, and she was plenty for us, thank you very much.

“Some of our members heard mewing coming from the bushes out near the parking lot,” said Kevin. “Took them a while to locate the source. It’s a little gray kitten that might be a month or two old.”

Jimmy on his bed. 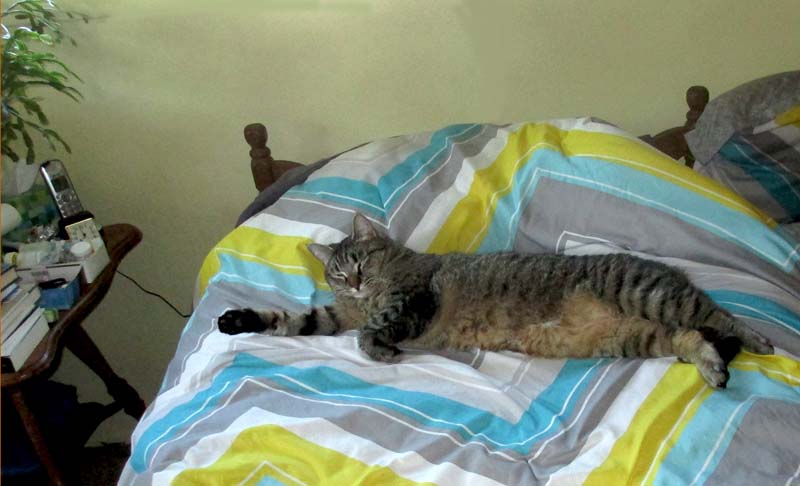 When I finished showering and dressing, I discovered that the kitten was still around. Staff members had found food for the little creature, and they had it closed up in one of the offices.

I asked if I could see it, and when the door was opened, I saw the kitten cowering under a chair. I bent down and reached for it, but it wouldn’t let me get close.

“What’s going to happen if you don’t find someone to take it?” I asked Kevin.

“I suppose I’ll take it home with me, but we already have too many cats. I sure don’t want to take it to the animal shelter if I don’t have to.”

“I need to talk this over with my wife,” I said. “I’m heading home right now. I’ll let you know what we decide.”

“Do you still have the kitten?”

“I’ll be there in few minutes to pick it up.”

When I got there with a pet carrier labeled “Scarlet Tanner,” one of the staff was holding the kitten. It was shaking like a leaf when she placed it in the carrier, and it was still shaking when the folks at Indian Creek Veterinary Hospital took it out.

“Look at this,” one of them said to her colleagues. “What a cutie.”

“All kittens are cute, aren’t they?’ I asked.

“They are, but this one is special, one of the cutest I’ve ever seen. It’s a boy, by the way.”

I hadn’t handled him yet, and it wasn’t until the next day when I brought him home that I touched and held him for the first time. He was a tiny thing, not much more than a handful.

We’d set up a small enclosure in the family room as his temporary home. He explored it for a bit, then sat down and looked at us. I had my camera ready, and the shot that I took is one of my favorites of any I’ve ever taken. I still can’t look at that picture and that innocent kitteny face without tearing up. (Hey, I’ve been around the block a few times. I’ve earned the privilege.)

Besides providing the kitten a bed, food and water, the next important thing was to give him a name. Several were batted around, the strangest of which was “Moses,” the name of one of my wife Ruby’s grandfathers. Eventually she suggested “Timmy,” which was close but didn’t feel quite right. “Jimmy” did, however, and Jimmy he is. Thinking about it later, I realized that although “Jimmy” is a boy’s name, it has been the name of more than one well-known adult: Jimmy Doolittle, Jimmy Carter, Jimmy Stewart, Jimmy Connors, Jimmy Dorsey. Even Jimmy Hoffa.

Life with Jimmy began rather shakily. He was extremely timid, hiding in a narrow space where we couldn’t get at him. He would come out for food and water, but only when we weren’t present. Any movement would send him scurrying into hiding. Slowly, however, he would let us touch him while he was feeding, and before long we could hold him in our laps. He, like every other cat, it seems, was fascinated by string, and dragging a shoelace across the floor would almost always result in immediate attacks. An inverted box with a small doorway cut into it became a favorite playhouse. Curious as all cats seem to be, Jimmy had to check out everything new, and the house was all new to him.

Initially, we had Jimmy fenced into the family room, but no matter what we did, he managed to find ways out, so we finally removed the barriers and allowed him the run of the house. Scarlet had seen Jimmy through the fencing that I’d set up, but this was the first opportunity for a confrontation. Scarlet was cool to the idea of having her territory invaded, and although I never did see them fight, the two never did get along well during their three years together.

The next big step was introducing Jimmy to the outdoors. He took to being outside right away, and that’s where he prefers to be unless there’s snow on the ground, or it’s raining. He’s a gifted hunter, now and then catching a careless sparrow or mouse, but he prefers bugs of all kinds.

He weighed a bit over a pound when he first joined the family. My guess is that he weighs over fifteen pounds now. I won’t know for sure until I take him to the vet for his booster shots in a couple of months. Neither he nor I look forward to that ordeal, I assure you.

The doorbell rang this morning as I was taking a shower. I finally answered, revealing a man who needed permission to work on the power lines in back. Permission granted, I went to see if Jimmy had reacted as he always does. Sure enough, he was gone, and it wasn’t until 2 p.m. or so that I finally coaxed him out from under the bed in the back room.

I would like to know why he is so timid. The club where he first showed up is a long ways from any homes, so he was either a feral cat or was dumped by someone who couldn’t be bothered. Who knows what life was like for him during his first two months? In any case, Jimmy flinches at any strange noise, and runs to hide at the sound of a stranger’s voice. Among those “strangers” are our daughter Michelle and our son Michael. If their visits last three or four days, Jimmy may come out and allow them to pet him.

To get a real idea of his timidness, consider this. In the past eighteen months, I was gone three different times for a total of twenty-three days. I hired the same young woman to house-sit all three times. She lived in the house when she wasn’t at work, and one of her instructions was not to let Jimmy outside. She abided by that faithfully—and during all of that time, she didn’t see Jimmy even once. I had to email her photos of him so she would know what he looked like.

We lost Ruby in September of 2017, so Jimmy is my Idaho family now, and we get along well. He is not a lap cat, but seems always to be near where I am sitting or working. He does like to come sit beside me in the chair where Ruby always sat, and will purr if I rub his chin. He sleeps on my bed, sometimes all night and always curled up next to me or lying with his head on my chest. I must add that Jimmy can be very generous, often letting me have almost half the bed.

We talk to each other a lot, I with general comments about the weather or how my pickleball game is going, he with not-so-subtle reminders that outdoors is calling or that his food bowl is empty. I’ve not been able to train Jimmy to any extent. He still scratches on any handy box or piece of furniture, has no clue about how to close a door, and generally ignores my efforts to coax him inside at night. He, on the other hand, insists that I get up at 6 a.m. to let him out, and that I have plenty of tuna, chicken breasts, and pork loin on hand.

Jimmy is fun to watch when he’s on bug patrol, looking for spiders, and when he dashes back and forth from one end of the house to the other. This activity always ends suddenly when he stops to scratch or lick himself.

The main thing, though, is that he supplies what this house needs right now, another warm body, another beating heart. At night before I turn the light out, Jimmy will climb up on the bed, snuggle up next to me, and put his head on my chest. As I scratch his ears and chin and tell him what a good friend he is, he begins a deep soft purring, and I drift asleep.

Les Tanner is shown here with his late wife, Ruby, to whom he was married for more than sixty years, and who also was on the staff of IDAHO magazine. When Les, a retired teacher, isn’t working on the magazine's calendar, proofreading, fishing, writing, playing pickleball, or pulling weeds, he’s out looking for Jimmy the cat.
View all posts by Les Tanner →