Zen and the Art of Hiking with Kids

“I won’t carry this even one step farther!”

Sam yells down the trail at me, throwing his first big-kid backpack on the ground. He plops down on a rock under a juniper tree and rests his back against sagebrush, ignoring branches that poke through his shirt and into his head. This petulance reminds me of his first time hiking up to Bench Lakes in the Sawtooth Mountains when he was two-and-a-half [see “A Legend in the Making,” IDAHO magazine, March 2017].  I thought it would be easier at seven.

Of course, we also have three-and-a-half-year-old Naomi with us this time. Sloth-like, she moves in half-steps, so slow it takes us an eternity to reach Sam, mere yards ahead of us. She sits down next to him. “There’s dirt in my shoes,” she moans. She sticks her foot out and I take the shoe off. I turn it over and a cloud of fine, powdery dust billows out.

I breathe deeply, but not because I’m out of breath. The kids have reached their breaking points and I’m tired of being cheerleader. We’re out of water. My husband Chris has run ahead to pump water from the lake, but I’ve given up on him making a speedy comeback. We need to finish this hike.

I hear muffled voices and the sound of footsteps. A young couple emerges from around a bend in the trail. They’re pack-less and don’t seem to have broken a sweat. How is it that their shoes and clothes are still so clean, while the three of us look like we’ve been wrestling in dust? Naomi’s dark hair is barely visible through the tan powder of trail dust. 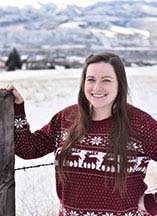 Elise Barker teaches English at Idaho State University. She is currently planning the second year of an intensive hands-on Harry Potter summer camp for kids ages eleven to seventeen through ISU’s Continuing Education. If she gets to the end of the day and hasn’t done something Instagram-worth, she rouses herself and creates a memory.
View all posts by Elise Barker →