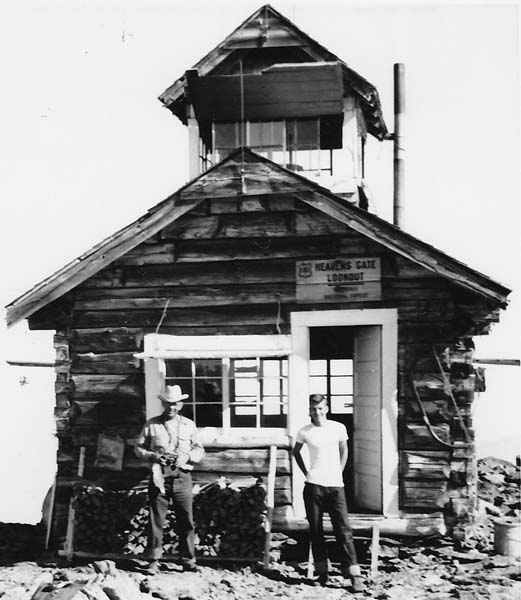 This photo from 1938 shows the original Heavens Gate fire lookout tower in the Seven Devils Mountains above Hells Canyon. It comes from the Lenora Hibbs Barton collection held by my late father, Ralph (Ace) Barton. Ace started riding horses at age two with family members as they herded cattle through Hells Canyon out of their Imnaha and Sheep Creek base. In 1951, he began working for the Forest Service as a fire lookout, and was one of the most gifted and sought-after fire readers in the nation, becoming a top fire boss before his retirement in 1980. Two years later, he was elected mayor of Riggins, serving for twelve years, after which the city renamed his street “Ace’s Place.” Among his many volunteer activities, he was a justice of the peace, marrying fifty-eight couples in all sorts of places, including Heavens Gate at sunrise. He also was hired for duty at Heavens Gate Lookout, which he helped to rebuild while in his seventies. We can’t identify the two men in this photo, but we do know the original cabin was built in 1924 at an elevation of about 8,500 feet, burned down in 1958, and was replaced by the current lookout in 1978. My dad died peacefully of natural causes at home in 2013, surrounded by family. Much historical knowledge was lost with his passing. We miss him every day.