Posted on by Mike Kincaid

A Busted Boom in a Spectacular Setting

Story and Photos by Mike Kincaid

It was one of those bluebird days, full of welcome sunshine after a snowy winter and a rainy spring. My wife Jill and I decided to embark on our first local road trip of the season, over the mountains to the ghost town of Lakeview on the southern shores of Lake Pend Oreille. No one seemed to have a handle on road conditions, and neither the Idaho Department of Transportation nor the U.S. Forest Service websites offered any guidance. However, since the lodge near Lakeview was opened, it was logical to this adventurer the road had to be passable. What could possibly go wrong on the way to Lakeview?

Over the last twenty years, I’ve either docked or beached below Lakeview on the glacier-carved, very deep (1,150 feet) Lake Pend Oreille in a boat or a seaplane, hiking up the steep hill to the peaceful little ghost town. Jill and I once spent a summer afternoon there with a ninety-year-old gentleman named Harry who told tales of exploring the depths of the local mines and scaling the looming mountain peaks.  Harry’s stories about the town’s history piqued my interest for more research. Ghost towns are intriguing, and as was mentioned once on PBS’s “Outdoor Idaho” series, the relics of mining operations are part of Idaho’s heritage, much like Roman coliseums, Great Walls, or pyramids are in the Old World.

Not wanting to bore readers with too much history, I will just go back 550 million years— that’s roughly when invertebrates swam in the seas of the Cambrian period. The fossils of those little critters are plentiful in the Lake Pend Oreille hills in sedimentary rock rich in calcite and aragonite, pretty much left alone until some smart fellow figured out how the raw material could be baked to make concrete. The first claim for limestone in Lakeview was in 1881, and then the Gray Brothers formed the Cannon and Gray Lime Company, which operated north of Lakeview. Kilns carved into the hillside can still be seen from the lake today.

Also in 1881, the first silver was found in the Lakeview area. The gold rush in California was dying down, so when a rumor of gold gushing from the hills south of Lake Pend Oreille hit the press, prospectors—and those hoping to make money off them—rushed into the hills in search of silver, gold, and other minerals. Twenty claims were quickly filed within ten miles of Lakeview and by 1890, the place had evolved into a bustling town. 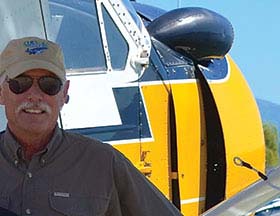 Mike Kincaid survived twenty-five years flying airplanes, mushing dogs, and trying to keep warm in Alaska before moving to Coeur d’ Alene in 1996 with his wife Jill. Retired from the Alaska State Troopers, Mike now teaches pilots from around the world to fly seaplanes and writes newspaper and magazine articles, mostly about flying and outdoor adventures. He is the author of the novel Alaska Justice. His website is www.flymls.com.
View all posts by Mike Kincaid →