Posted on by James R. Spencer

Sheriff Tim Nettleton waded into the Owyhee River to retrieve the body of his friend, Conley Elms, an Idaho game warden who had been murdered along with fellow officer Bill Pogue by Claude Dallas, a desert buckaroo and self-styled mountain man. Dallas shot the two game officers when they came to his camp to investigate his illegal trapping methods. Bull Camp was less than five miles inside Idaho’s southern border, which abuts Nevada. Dallas surprised the officers with his hidden .357 magnum. After gunning them down, he retrieved his .22 caliber rifle from his tent and put an execution-style shot into each man’s head, as if they were one of his illegally trapped bobcats. 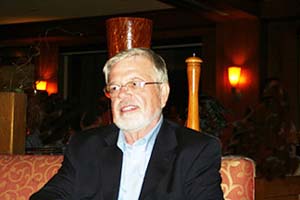 James R. Spencer is a writer who has lived in Boise for twenty years. Born and raised in Wyoming, he says when not in the desert, he is dreaming of it. He can be contacted at jspencer@clearwire.net
View all posts by James R. Spencer →
ORDER BY MAIL