In the pink and blue early morning light, a faded wooden barn stands tall against the rolling foothills of golden prairie grass. Snowcapped gray and green mountains loom in the background, the whole scene like a painting. But for the people of Fairfield, this is a reality. I was born in Idaho and have developed strong ties to Fairfield over my twenty-one years, visiting multiple times each year as well as hearing stories about it from my family. My mom was raised there and my father lived there for some years. While I can’t claim Fairfield for my home, I feel like I know the place in my heart and appreciate everything it is.

I think of it as an uncut gem hidden in the foothills of the Sawtooth Range. With only two paved roads and a population of about four hundred, it’s easy to overlook, but I know firsthand that geographic isolation and small stature don’t prevent Fairfield from being lively all year long.

Soldier Road, one of the town’s two paved byways, runs north from the highway towards the Sawtooths and is home to several restaurants, stores, and other amenities. The rest of Fairfield makes use of good old-fashioned dirt roads, less from the people’s choice and more because of the marshlands on which it was built. Growing up, I watched my dad as he drove, following the tracks in the road and avoiding the puddles, aware that within a few weeks everything would be dry. Nobody makes a fuss about it—it isn’t that kind of place. 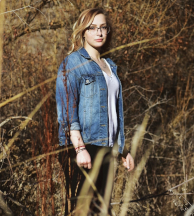 McKenzie Schilz is an Idaho native who often can be found sitting on the porch with a good book. She is a College of Southern Idaho graduate who wrote the story in this issue for an expository composition course. She enjoys exploring her world and all it has to offer, trying to find a brighter, newer angle to life.
View all posts by McKenzie Schilz →
ORDER BY MAIL