Posted on August 1, 2020 by Laurie Spratling

The water reached Malta before the townspeople were ready. February 2017 was unusual for southern Idaho, with unprecedented amounts of moisture and warmer than average temperatures affecting much of the lower part of the state. Many in the Raft River area predicted flooding, some even speculating a hundred-year flood. But most figured the coming tide would be minor, as it usually was year after year, a swelling of the creeks with minimal damage to the roads as the water spilled over and washed dirt away from the culverts: a yearly nuisance to be expected.

A local rancher checking fences in the Raft River Range, which creates a definitive border between Utah and Idaho, returned to town with a report that heavy rains and sudden snowmelt would send a flood worthy of notice towards the little community, whose population of roughly two hundred makes it the biggest town within the Raft River Valley.

The rancher was right.

Overnight, the mile-wide Raft River returned to a course it had run at an earlier time, when water was plentiful in the valley. The resurgence caused roads to vanish, which left families stranded in their homes. Animals were surrounded by water, stuck on little islands with limited food sources. Newly born calves were caught in the torrent with no way to escape, washed down the newly created stream beds. Homes built on the original Raft River floodplain filled with silty water so quickly that families lost many heirlooms.

Sand piles, shovels, and white drawstring bags appeared in the Raft River High School parking lot almost as quickly as the water did. Pickup trucks soon began to show up, bringing families from within a fifty-mile radius to help fill the empty bags with sand. The students—most of them young farmers, ranchers, and dairymen, future stewards of the land—began loading trailers and trucks with bags to be placed around homes affected by the floodwaters. Food was provided and delivered to those who were working. 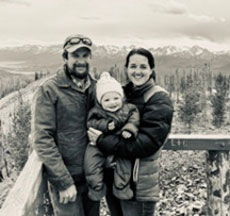