Posted on by Jesse L. Ayers

First You Catch Them, Barehanded

Grabbing a twenty-five-to-thirty-inch wild salmon by the tail is no easy task. Catching a Chinook with your bare hands is easy enough when it’s in a holding pond at a hatchery, but keeping your grasp on a wild, powerful, splashing, determined salmon intent on freeing itself is extremely exhausting, and wet. That was my experience in August when I was among a small group of veterans who volunteered to help collect and artificially propagate Chinook at Rapid River Hatchery, located at the base of the Seven Devils Mountains near Riggins. Three million salmon are raised and released each year from the hatchery, owned by Idaho Power and staffed by Idaho Fish and Game. Kelly Odell, the recreation therapist at the Department of Veterans Affairs in Boise, organized the trip and provided our transportation.

We planned to camp overnight and spend a day working alongside hatchery staff in the annual milking of the salmon, a phrase referring to the removal of unfertilized eggs or roe from female fish by applying pressure to their abdomens. During the artificial propagation process, the female is killed and the male’s sperm or milt is mixed with the female’s eggs. I met the other veterans—Jeff Syslo, Chad Winebarger, and Dennis Patton—in a parking lot at the Boise VA. Because space was limited in the minivan, each volunteered was asked to pack only the essentials needed for one night of camping. We started a three-hour journey with a fully loaded vehicle. 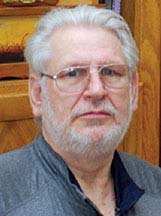 Jesse L. Ayers is a retired architectural project coordinator, former merchant seaman, and photographer. He received an associate of arts degree from Valencia Community College, and recently returned to Boise State University part-time to pursue a multidisciplinary bachelor degree with a minor in English and writing. Jesse, who lives in Boise, is presently working on a collection of short stories.
View all posts by Jesse L. Ayers →