Posted on by Lucas Handy

Story and Photos by Lucas Handy

“Where in the world is Moore?” I had to ask Carol Webb, my mother-in-law of two months, when she revealed their family’s plan to move there.

“Mmm,” was all I could muster as I imagined their alfalfa crop blooming in the cracks of lava flows at Craters of the Moon.

This was February 2013, and in a matter of weeks the Webbs forsook their family farm of generations at Raft River, a community at the confluence of the Raft and Snake Rivers west of American Falls. Their move was only eighty miles north as the crow flies but the Webbs felt like pioneers, and were delighted by the welcome they received from members of their new community.

From our home in Rexburg, my wife Mary and I headed straight west across the desert to find the mysterious little town. When we reached the unincorporated community of Howe, we followed the central Idaho desert line to Arco. Then we turned north and let the Big Lost River—locally known as the simply the Lost River—guide us eight miles on Highway 93 into the midst of the stunning Lost River Range. I’m a city boy originally from Burley, and it seemed that the voice in which this part of Idaho spoke to me was eloquent.

The Lost River is so called because it loses water, drop by drop, as it snakes its way through the desert and feeds the valley. While we drove onward, the landscape turned greener and the mountains grew. Nostalgia cascaded over me as I recalled visits to my grandfather’s cabin in Sun Valley just fifty miles west of this valley, but separated by the 12,009-foot Hyndman’s Peak. Five of the tallest peaks in Idaho tower within forty miles of Moore, nourishing the quaint valley with runoff from the snow and shielding it on all sides except the south. The farther we drove up the road, the more prominent the mountains became, which again reminded me of arriving at Grandpa’s place in the Wood River Valley. 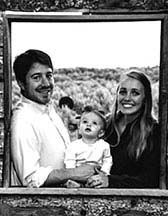 Lucas Handy completed a bachelor’s degree in business and a master’s in public administration from Brigham Young University. He then returned home to marry a beautiful farm girl from Mini-Cassia, Mary Webb. She also wanted a degree, so they moved to Rexburg, where Lucas now works at Madison Memorial Hospital and consults with businesses.
View all posts by Lucas Handy →