Posted on by Kelly and Erin Fanning

On Living and Dying Well

By Kelly and Erin Fanning

This article is offered free in its entirety for the first part of April.

Kelly Fanning, a Nampa native, spent her early years interstate and overseas before graduating from junior high and high school in Caldwell, where she was senior class president and commencement speaker in 1982. She went on to earn a PhD in nursing practices, worked in Nampa, and then was a family nurse practitioner for more than a decade in Wilder and Parma. In 2014, Kelly was named Idaho Nurse Practitioner of the Year and Idaho State University Distinguished Teacher. The following year, she helped to obtain a $1.5 million grant for ISU’s School of Nursing to provide health care for refugees. A mother of three girls, she was a competitive swimmer, on the ski patrol in Alaska, and a barrel racer in Arizona. In 2008, after contracting cancer, she began making quilts for loved ones. She died of cancer in 2016 in her Parma home, surrounded by family and friends. Her sister and “best friend,” Erin Fanning, assembled entries from a blog Kelly wrote during her struggle with the disease. Erin supplemented it with her own journal about her sister and published the text as a book, Quilting Cancer, the proceeds of which will be donated to St. Luke’s in Fruitland. The following excerpts are reprinted with permission.

The mood was festive—almost celebratory. It was early on a warm June evening and we had gathered at a local high school running track. The sun was shining, but a breeze prevented the evening from becoming too warm. A stage had been erected on one side of the track, and upbeat music, sometimes country and sometimes rock ‘n roll, blasted from the on-stage speakers. Scattered around the track, tents had been pitched by various groups of people. The groups, made up of adults and children of all ages, wore matching T-shirts, signifying their individual team memberships. Some sported tie-dyes, others pink or white or blue. The largest group wore purple—this year a heather purple, which pleased me because that was my group . . . the survivors.

There were warm greetings among the survivors, genuinely happy to see one another. We gathered under the largest tent for a meal of sandwiches, fruit, and cookies. We laughed and reminisced, living in the moment, a skill that many survivors have perfected. We stood for the national anthem and then a prayer.

There were various speeches and introductions. Event organizers, beautiful and caring people who had obviously dedicated a tremendous amount of time and effort, were greeted with hearty applause. And people who had raised varying amounts of impressive and generous donations and sponsorships were also enthusiastically applauded. Luminarias, hundreds of them individually decorated, were lining the track, waiting to be lit as the sun set. We had gathered for the annual Relay for Life.

Lasting eighteen hours each year, the Relay for Life is a fund-raising event sponsored by the American Cancer Society. It takes place worldwide during daylight and overnight. As darkness descends upon the track, it is a reminder of the physical effects, emotions, and mental state of cancer patients undergoing treatment. The fatigue experienced by relayers in the early morning hours mimics that of a cancer patient facing diagnosis, treatment, and recovery. The track is lined by luminarias made in remembrance of those who have lost their fight against cancer, and in honor of those who are still fighting. Perhaps my favorite part of the relay each year is that I make one in remembrance of my dad. 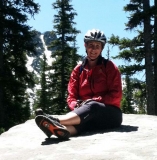 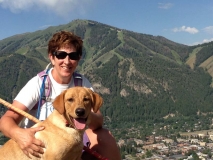 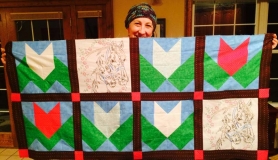 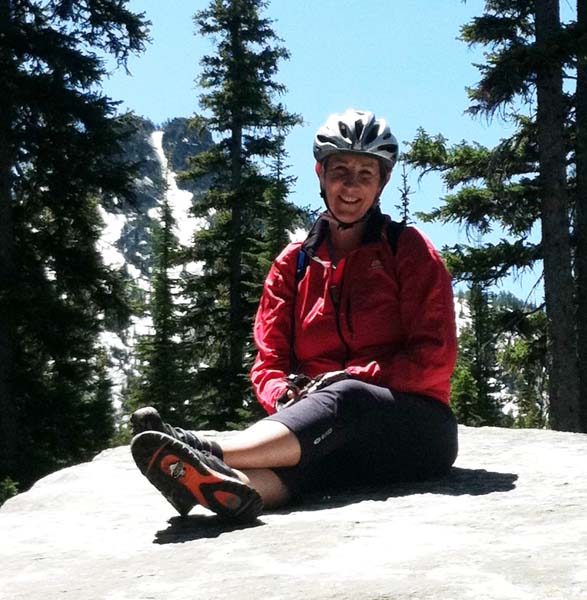 Kelly in Parma with her horse, Indigo. Shane Harris photo. 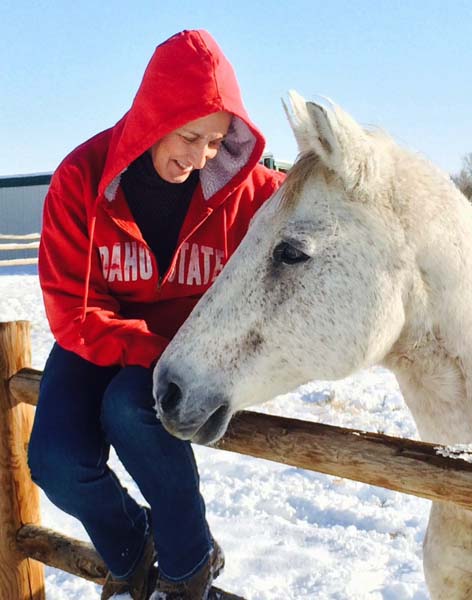 Hiking in front of Bald Mountain with her dog, Princeton. Shane Harris photo. 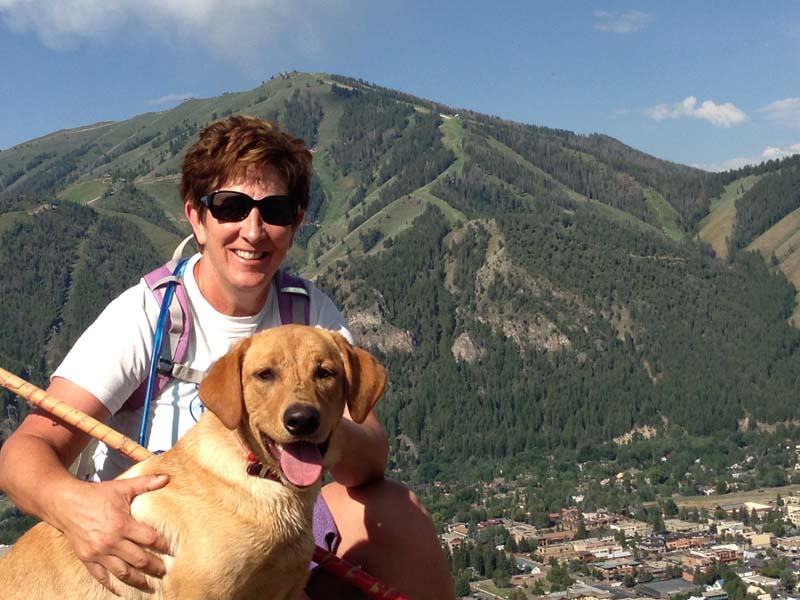 Kelly displays a quilt she made for her daughter Sheridan. Shane Harris photo. 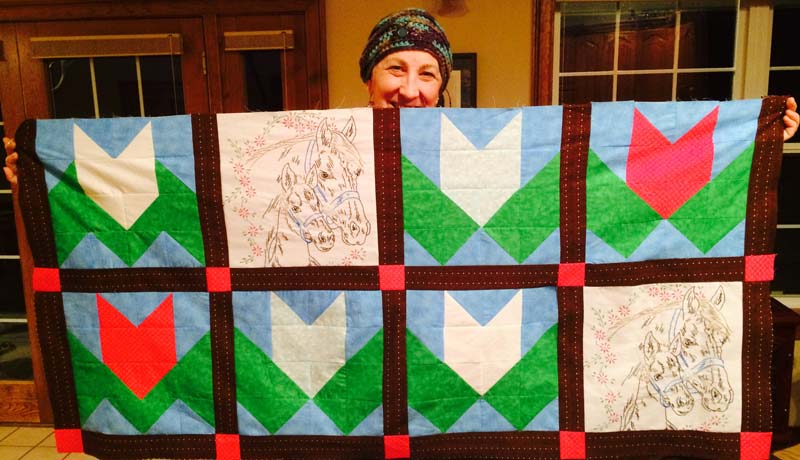 A quilt she made for her daughter Shaelyn. Erin Fanning photo. 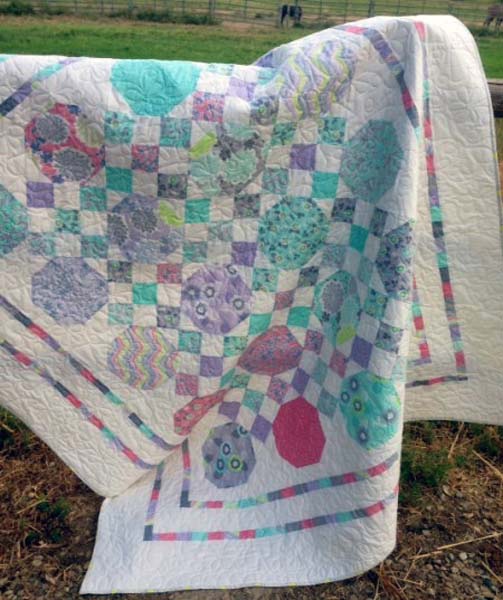 One made for her daughter Sierra. Erin Fanning photo. 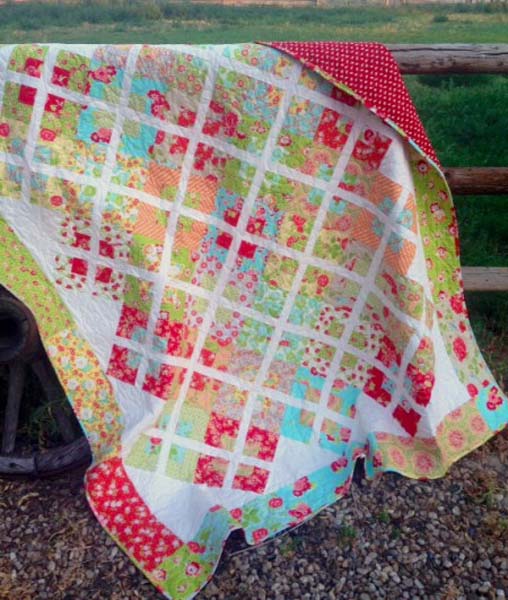 But as much as I appreciate the support, camaraderie, and efforts of the event planners and my fellow survivors, the Relay for Life is a bittersweet experience for me. Please don’t misunderstand—I am extremely appreciative of the funds that are raised by more than four million relay participants worldwide. And I am honored to be treated, along with my fellow survivors, as a VIP each year. And although each year that I attend, I am very glad that I did, it is a reminder of the loved ones I have lost and of the battle I continue to fight.

This year my role was a little different than in years past. Along with receiving my medal, walking the Survivor Lap, and seeing a luminary meant for me, this year I would be the Survivor Speaker. I had been asked to talk about what it means to be a survivor. Although my speech was to be only about five minutes in length, I found this to be a challenging assignment. My definition of survivor has changed over the past eight years; it has become more defined, and it carries a great deal of emotional and spiritual weight. I have included the transcript because although I think that speeches are better heard than read, I realize that the recording [found on YouTube] may not work for everyone (some of us would rather be quilting than figuring out computer technology). I believe that it conveys my message about what it means to be a survivor. And as I spoke, I could see survivors in the audience nodding their heads in agreement and wiping away tears. Hopefully I represented them well.

Here’s to my fellow survivors!

I didn’t always feel that way. When I was diagnosed with cancer eight years ago, I didn’t want to be a part of this—didn’t want to be here. I wanted to hide, and I wanted to deny that I had cancer. I wanted to get through treatment as quickly as I could, be cured, and put the whole thing behind me. I just wanted my life to go back to normal. I’m sure that many survivors feel the same way.

First, I have learned that I couldn’t walk away as if nothing had ever happened because cancer changes us—it changes our bodies, our health, our spirits, and our lives. But, among those changes, cancer has made me stronger, more determined, and better prepared. It has made me appreciate each day more than ever before, and it has made me braver than I have ever been. It has made my faith more profound, and it has taught me to love more deeply. What I have learned is that although I couldn’t run away from cancer, and my life would certainly not go back to normal, I could choose to turn toward the places where I find inspiration, and I could choose the way in which I carry out this journey.

We, as survivors, choose the way in which we carry out this journey. We could choose to wallow in self-pity and become blind to the beauty of each day. And we could choose to be fearful, controlled by anxiety and an unknown future. However, as survivors, we have chosen to face each day with optimism and courage. We have chosen to rely on our faith and the faith of those who love us and believe in us. We have chosen to set an example of resilience for our children and grandchildren, our brothers and sisters, our friends and our communities. And we have chosen hope over fear, “smiles over tears and effort over complaint or regret.”

I have also learned that survivorship is not a solo act. We have not survived alone, and we are surrounded by our co-survivors—our loved ones, our families, our friends, our caretakers, and our communities. Without their love, support, and encouragement, we are merely getting by. But with our co-survivors, we don’t face this journey alone. We have someone beside us, driving us to appointments, sitting with us throughout treatment, shouldering the bad news and the good. We have someone bringing meals when we aren’t up to cooking, running errands for us, and looking out for our children. Our co-survivors make an evening such as this possible. They celebrate with us and for us. They also choose “smiles over tears and effort over complaint or regret.”

So, how do we carry out this journey, this story of ours? How do we face this new world? Well, as survivors we dig deep, we pluck up our courage, we pull ourselves up by the boot straps, and we put one foot in front of the other. We buck up, we take the bull by the horns, and we get back in the saddle . . . and most of all we never, ever, ever give up.

Breezes tugged them across the pasture, where Indy, an elderly quarter horse, nodded his white head and swatted his tail, as if wanting to hurry them along, understanding their significance. They drifted, stretching across a wide horizon, their strings shimmying with the wind. Climbing higher, the balloons joined with clouds etched in pink and red, reflecting the setting sun.

The thirteen of us, family and friends, sang “Happy Birthday,” our voices at first faint but eventually gathering strength. Then we all stood there in silence, watching the floating greeting cards until they disappeared from sight.

And even though the intended recipient, my sister Kelly, was no longer with us, having left us only two days prior, I felt her presence, as I’m sure everyone did. Perhaps she was the feathery breeze brushing across our cheeks, the burst of wind chimes singing out into the dusky night, or the shadows darting around Indy.

Our simple gesture of remembrance had altered an evening ripe with anguish and sorrow into a night full of grace. And it was an eight-year-old girl, Lexie, who we had to thank for the transformative gift, a reflection of the love that my sister had generated throughout her life.

Lexie had wanted to give Kelly a birthday present, telling her mother Mandy that she knew exactly how to deliver it, and Mandy made it possible, gathering all the supplies. Because of their initiative, it was easy to imagine the balloons, as they grew smaller, mere pinpricks against the vast sky, leaving this earth for a heavenly embrace.

It was one of many moments of grace over the past several years, during Kelly’s long battle with cancer, in which generosity and selflessness fused together to defeat pain and fear, allowing us to transcend our grief and recognize how extraordinary and giving people can be.

These grace notes lived within Kelly and continue to envelop my family, filling our hearts with gratitude even as we mourn. And so this letter of thankfulness begins with a little girl, who understood that birthday celebrations never need to end, and continues with an almost endless list of people who helped my sister carry her burden, trying to slip it off her shoulders, if only for a few seconds at a time. 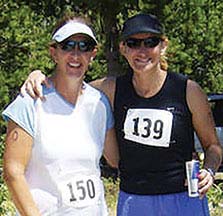 About Kelly and Erin Fanning

Kelly and Erin Fanning were born best friends and sisters, learning to rely on each other while moving internationally as children, sharing triumphs and interests, and supporting each other despite life’s challenges, including Kelly’s eight-year, ultimately fatal struggle with cancer. The book Quilting Cancer is available on Amazon in both Kindle and paperback editions. All proceeds will go to St. Luke’s MSTI-Fruitland.
View all posts by Kelly and Erin Fanning →