Posted on January 1, 2016 by William and Richard Norton

A Ghost Now, yet Alive in Memory

Many people have a place in their past that they hold dear in their hearts and minds, a place whose memory can restore the happiness, freedom, independence, and growth they experienced there. For nearly forty years, the all-but-forgotten sawmilling community of Omill has been that place for our family and close friends. The Omill sawmill site is located in Clearwater County, about twenty miles north of Orofino on Grangemont Road and roughly four more miles down Cow Creek Road. Established in the 1920s by Lawrence Olson primarily as a tie mill that produced railroad ties for the expanding Camas Prairie Railroad, Omill was never large enough to be incorporated into a town or city, but it provided a living for twenty to sixty families who lived there for decades.

Lawrence Olson’s grandson Darrel told us during a recent telephone conversation that his grandfather was “a big, strong, hardworking, uneducated, but highly driven Norwegian” who built Omill and a second mill at Olson’s Pond a few miles away. He supplied both mills with logs from land he purchased through real estate tax sales during the Great Depression years of the 1930s. “Grandfather saw these purchases as a onetime-use proposition, and once the land was logged he often let it go back again for delinquent tax sales the following year,” Darrel said.

Through another recent phone call, this one to Mike McCarthy, we learned that in the early 1940s, the two Olson mills and the neighboring Band Mill were purchased by Mike’s parents, Joseph L. and Helen McCarthy, and by the White Pine Lumber Company to produce white pine match block stock for the Diamond Match Company. The wood came from thirty thousand acres that Mike’s grandfather, onetime Idaho lieutenant governor and homesteader William B. Kinne, had acquired largely through the purchase of railroad script lands. Mike explained that many of these land purchases were made “for a dollar an acre with the stipulation that the buyer would agree to ship their forest products by rail.” He also told us, “Omill and their surrounding lands were purchased by the Potlatch Corporation in March of 1961 and the mill was still in operation until the early 1970s.” 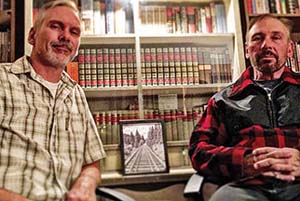 About William and Richard Norton

William and Richard Norton are brothers and former Idaho residents who now live in South Dakota. Loving dads and husbands, they are both retired loggers who write, photograph, videograph, hunt, trap, fish, and are avid outdoor enthusiasts. They say, “Our work is inspired by the kaleidoscope of memories and experiences associated with the past.”
View all posts by William and Richard Norton →
ORDER BY MAIL