On the Road Again

In 1976-77, Alan Minskoff and associates toured Idaho to assess the future of its small towns and publish the results in two issues of the now-defunct Idaho Heritage magazine. More than four decades later, he traveled for sixteen months to reacquaint himself with what was happening statewide. The results were published recently as The Idaho Traveler (Caxton Press, 2019). Excerpts are published here with permission.

My meeting in Elk River was a little bit of a sitcom with folks coming in and out of the Elk River Lodge and entering the conversation at will. I learned a lot but candidly could not always tell who was who on the tape. We met in the Elk River Lodge and General Store. It had changed ownership quite recently and Dixie Stevens and her husband Steve are the owners. The town slogan is “Where Highway 8 ends and the fun begins” and Elk River tucked into the trees feels at the end of the road. It is isolated and revolves around the forest. I must have passed a dozen logging trucks on the seventeen miles from Bovil to Elk River, part of the aptly named Backcountry Elk River Scenic Byway.

When we met in Elk River more than four decades ago, we had one of our largest turnouts (one local sniped, “Not a whole lot to do,” then and now),  and  the  meeting got off to a rollicking start. Our cars (one with official types from the state and the Association of Idaho Cities and the other containing us, the magazine contingent) got separated. We—that is, the magazine group—arrived much earlier. The meeting started and the locals took the opportunity to unload a slew of grievances directed at how the forests were being managed.

Back then there was a cedar mill that produced shakes, posts and rails but it’s long gone now. The handsome old schoolhouse has been out of service for years. I took a photo of a camper parked in the lot forlornly looking up at it. Elk River has steep streets, a tiny population, no local law enforcement and the nearest medical facility is fifty miles away. Most of the residents, the males anyway, worked in the timber industry. Logging still supplies work, although Dave Pelton, who logged and has lived here for almost fifty years, says the timber business “ebbs and flows; they’ll have several sales.” Elk River sits in the midst of the Clearwater National Forest. Pelton said seven or eight people commute the hour and a half to Lewiston or Moscow for work. 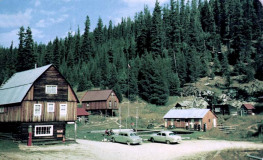 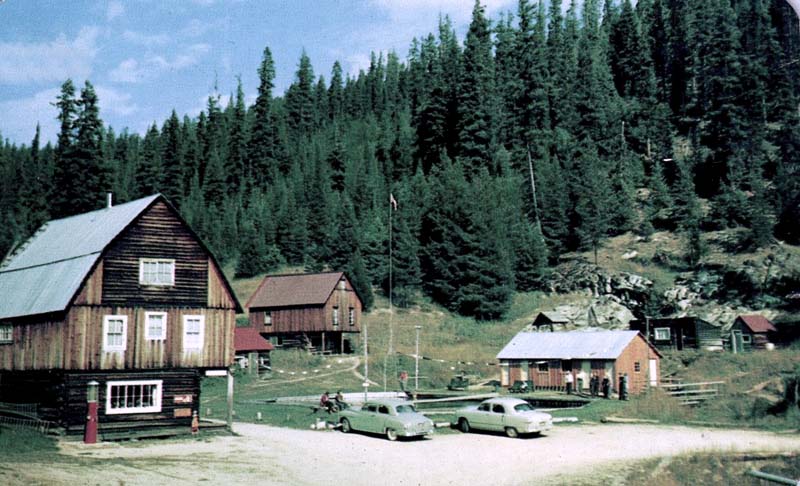 A juxtaposition of the old and new in Elk River. Alan Minskoff photo. We were joined by the irrepressible, eighty-six-year-old Babe Kreisher, who is missing a couple of fingers. He has lived in Elk River his entire life, is the youngest of eleven children, and spent his working life logging and as a skidder for thirty-eight years; now he said it has all changed. Now the work he did is mechanized.

They do have wolves and among the folks who wandered in and out of our meeting, there was not real agreement about whether they did real harm. Asked about the effect of wolves, folks said their presence “has changed elks’ behavior, made them skittish, and they don’t bugle like they used to, because it attracts wolves.” Dave Pelton said, “We would like the wolves more if we could teach them to eat Californians.”

People are moving here. Steve and Dixie Stevens wanted to move to the “wilderness,” and when the lodge became available they bought it. First thing they did was bring breakfast back. They also make pies from scratch and a “huckleblurry.”

The relationship with the Forest Service is no longer at issue. Back then, JT Hall, which went bankrupt, was reputedly cutting hundreds of thousands of board feet per year. Elk River is still a resource economy, but the biggest problem, according to residents, is people have to work where the trees are, which could be “five miles away one month, and fifty miles away the next month.” Rick Trott, who is a councilman,  joined  our  group. He  maintained that some of the issues in Elk River echo what we heard elsewhere: school consolidation—1989 was the last year the school was open in town—tax base, people coming up on weekends to raise hell. He said Elk River “is more of a recreational town. People come here to hunt and fish, ride four wheelers, side-by-sides, and they come from Moscow, Lewiston, Yakima and Spokane.” They get some cross-country skiers and snow cats in winter. Babe said he didn’t “like the people coming in here.” Every summer there are about  two hundred people traveling here every weekend. He added, “People come here because they think they can do what they want to do.”

One complaint is that the recreationists “don’t respect the people that live here.”

Bars and the streets fill up and there can be four or five hundred people when they have events, and the county sends a couple of sheriffs up here. Trott says, “Small town  like this, we still have the same issues that big cities have. But we just have fewer people to pay for stuff.”  He adds, “We still have snow to plow. And we get more snow here in Elk River than most places, sometimes two or three feet at a time.” Babe added, “We are in a snow belt . . . in 2008 nine damn feet of snow.” The first snow comes about the middle of October.

Today there’s about 80 to 125 people who live here. The number is a moving target, because some folks are here only on weekends. There were some criticism of the out-of-state hunters who come in. Babe says, “They kill so many of the big bulls . . . people come from back east and pay three hundred dollars for a deer tag that probably cost them five to six thousand dollars to get a deer. This year they can only get one tag.” There is also an archery season that begins earlier.

One statement from Councilman Trott that rang especially true was about the road to Elk River that was described as “the longest seventeen miles you’ve ever been on.” Amen.

Forty-four years have passed since we piled boxes of brochures, questionnaires, visual aids, and recording equipment in the back of my VW squareback and hit the road for small-town Idaho. The difference on my journey this past sixteen months is most of the time I have been traveling solo and the only piece of equipment has been an iPhone.

My wife Royanne went with on the July Fourth weekend jaunt to North Idaho, and Doug Copsey on trips to Lava Hot Springs, Bruneau and Grand View, Shoshone and Preston. He also got roped into massive breakfasts in Pocatello. I now navigate Idaho’s roads in an Audi Q5 SUV. It’s much surer on the state’s steep inclines, and as a septuagenarian I need all the visibility I can get.

The backroads and scenic byways have been my preferred routes. Unless no other way exists, I have stayed off  the Interstates. The hallmarks of this project—revisiting the towns, eating local and sharing some favorite places—allowed for some personal downshifting and focusing on the details. Who knew that Grangeville celebrates Independence Day with an annual egg toss competition, or that both Wallace and Banks claim to be “the Center of the Universe,” and Oakley and Elk River are at “the end of the road?”

Luckily for me and this book, I had saved the file box from four decades back that housed the folders, clippings, filled-out questionnaires from the meetings. While flipping through the files, I found a piece of notepaper that I had scratched some ideas on, for an essay on small towns.

I have used this list from our meetings, reporting and time spent in the road. Then and now, economic development, stability, is central to the well-being of these small towns. As Governor Brad Little points out, Idaho small towns need jobs to keep, and attract, young people.

What remains intrinsic to small town and rural life in our state could be indexed as looking out for each other. Someone suffers, the community rallies. The idea of pitching in and helping your neighbor was axiomatic, repeated in interviews in St Maries, Mackay, Preston . . . well, most everywhere. Like barn raising of old, coming to your neighbor’s aid seems built into small-town folks’ DNA.

Many of the original topics resonate today. Government power strikes a chord across the decades. Who decides what and how local governments function continues to be contentious. The much-criticized federal government still owns and controls most of Idaho’s lands, and is especially present in small towns. Yet many federal employees—BLM, Forest Service, INL et al.—live and work in small towns. The state government presumably safeguards rural Idaho, but it is often seen as having too much decision-making control over them. State mandates can have serious repercussions here. Wolves remain controversial.

Forty-three years later the sense of place, regard for history and pride in the built environment are shared values, from Oakley and Paris, with their elegant homes, to Wallace, with its intact downtown, to the surviving ghost towns—Idaho City, Murray and Silver City—that evoke our mining past.

Mostly ignored by the media, small-town Idaho is  where I returned to check in, witness the changes. Most folks willingly stopped what they were doing when I wandered in unannounced, which happened a few times, and talked with me freely. Pace of life continues to be more deliberate. People make time for each other and there’s the restorative presence of  the  mountains, forests and lakes. Of course, the modern world can be too much with them: Housing can be challenging (Grangeville); bigger cities are far away (Salmon); weather matters (every town over six thousand feet); they may be historic and have grand old buildings but work’s hard to find (Murray, Paris, Idaho City); growth has come (Bellevue, Rathdrum); and atypically, a hugely successful hi-tech company founded by a local is headquartered here (New Plymouth).

What else? A few of the smallest towns feel very much the same. Lava Hot Springs, Bruneau and Grand View, the ghost towns. The decline of the family farm still remains a fact of life. But the rise of the organic movement and the presence of so many farmers’ markets blossoming statewide seem healthy signs. The beautiful Colter’s Creek tasting room/restaurant in Juliaetta was not even a possibility back then. And the arrival of craft breweries from Victor to Bonners Ferry is entirely new.

While the expanding urban centers gobble up agricultural lands, the rituals of the harvest can be seen and appreciated when you get into the country. I will long remember the trucks loaded with sugar beets on the road from Shoshone to Minidoka, the cleansing rain and intense green vistas going past Swan Valley on the way to Victor, cherish the unfettered time wandering around Oakley, Mackay, Preston and Bonners Ferry. New Plymouth’s horseshoe design is unique, and religious architecture is well represented by the Cataldo Mission and the Paris Tabernacle.

When I moved to Idaho in the early 1970s, a common bumper sticker read, “Idaho is what America was.” These  days, with Boise’s appeal being heralded on Saturday Night Live and Moscow deemed the best place to raise a family, Idaho is on the media map. All the more reason to travel to our remotest communities, stop in, look around and have a big Idaho breakfast—and don’t forget the pie.  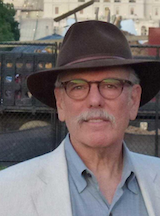 Alan Minskoff moved to Idaho in 1972. An author of nonfiction books, poetry, and essays, he has edited several magazines, and teaches journalism at The College of Idaho. He lives in Boise with wife Royanne.

View all posts by Alan Minskoff →