With the Help of a Weather Station

Story and Photos by Joe Huffman

Most Idahoans look out the window if they want to know which way the wind blows, and for details, they turn to the weather report. But sometimes you need to get granular. One place where it’s good to have precise information is at a long-distance shooting range like Boomershoot—a high-power rifle range near Cavendish in Clearwater County that has explosive targets up to seven hundred yards away. The author, a software engineer in Bellevue who founded Boomershoot, decided in 2017 to set up his own weather station at the site. This year, he made significant improvements to the installation. He chronicled both efforts on his blog, “The View from North Central Idaho.” His story is reprinted here with permission.

There used to be a home weather station about a mile from the Boomershoot site that was available on the Internet via Weather Underground. I would check the weather and know it was a very good representation of what was going on at my property. My phone app, Field Ballistics, automatically looks up the closest weather station to your shooting location and can feed that information, including the direction you are shooting, into your shooting solution. Having temperature, air pressure, and wind for when I was doing some shooting on-site without getting out my thermometer, wind gauge, and air pressure meter was very cool.

A couple years ago, the family with the weather station moved away and took the weather station with them. Brother Doug has a weather station about two miles away but he hasn’t connected it to the Internet and isn’t interested in doing that. I contemplated putting one up at Boomershoot Mecca [the explosives production facility], but with all the trees around it, the wind measurement would be wrong. I finally decided that I would put one at the Boomershoot shooting line. I needed to put in solar power and a permanent Internet connection there, but I decided it was worth it. 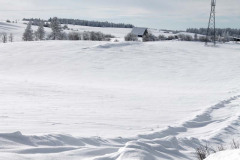 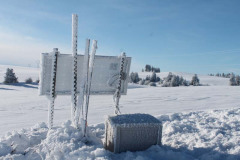 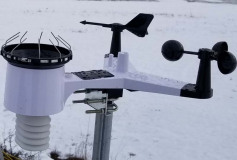 Bringing in the equipment for the weather station. 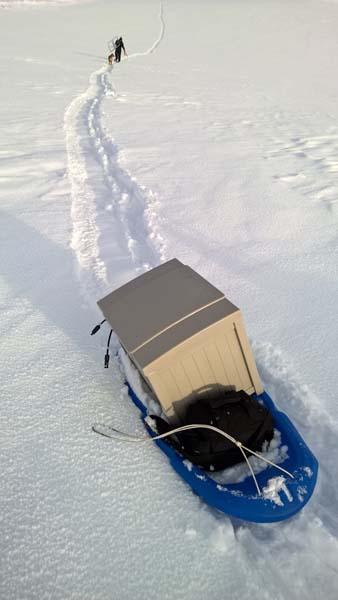 The driveway to the shooting line at the rifle range. 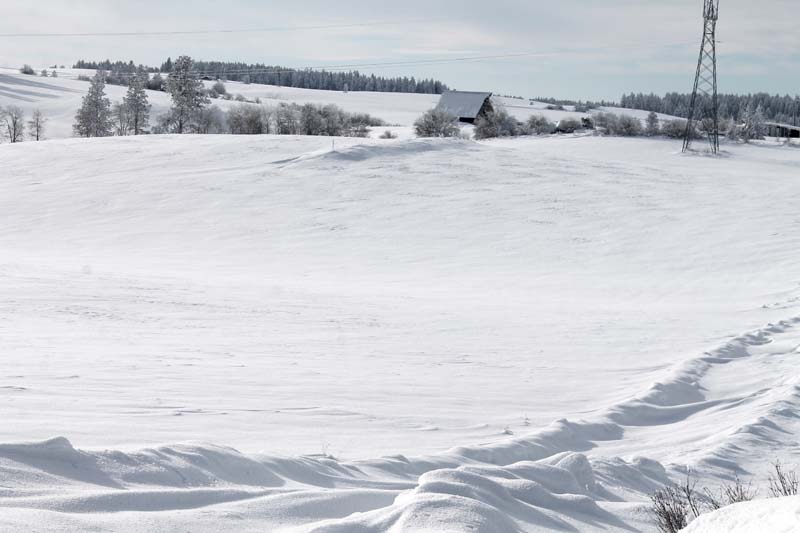 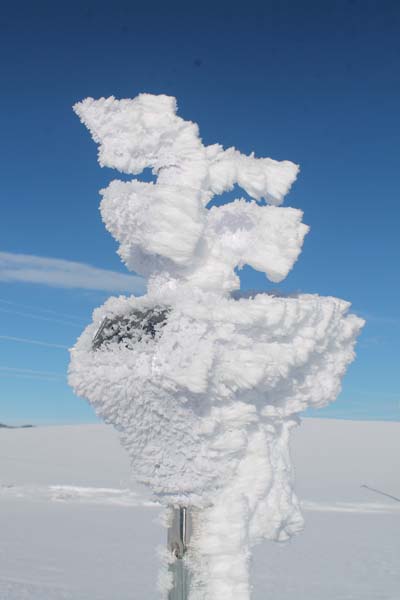 The "indoor" unit of the station. 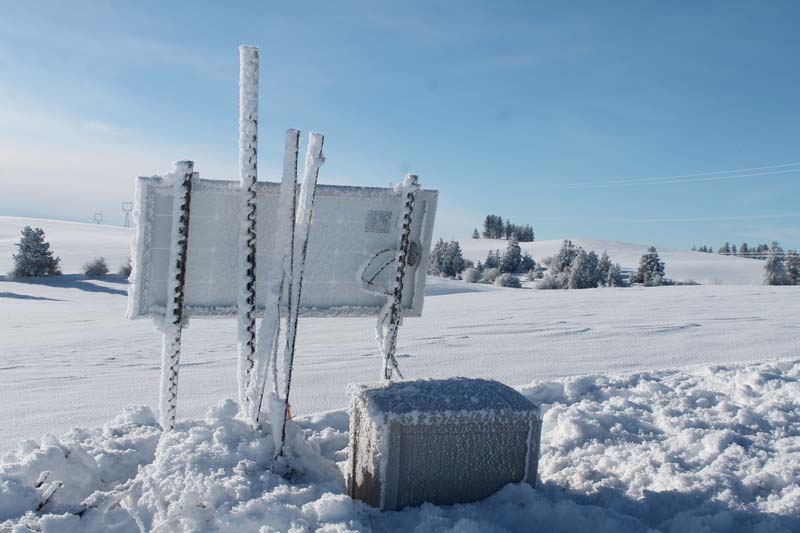 Spikes on the rain gauge keep birds from perching or building nests. 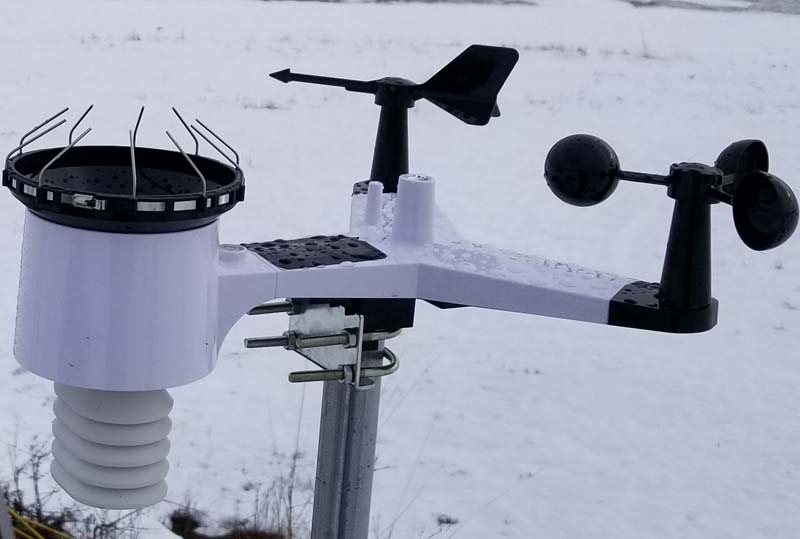 Yesterday my daughter Kim and I did most of the work. I accidently left a critical part in Bellevue [Washington], so it is not online yet, but it’s close enough that it will be a short job the next time I visit.

It was cold and there was deep snow. Dropping a bolt or nut into the snow would have been a serious problem, so we assembled everything we could while in Doug’s family room. We loaded up everything, including snowshoes, and drove over to the Boomershoot site. We knew we would have to carry in everything the last 250 yards or so.

As expected, the driveway into the shooting line had drifts in it and there was no way we were driving in. The road there was plowed but as sister-in-law Julie explained, there is a new snowplow driver for the county road department. The community has taken to calling him “One-Lane McClain.” We parked just across the road from the entrance, which was mostly blocked by a vehicle anyway. Since this was a one-lane road, thanks to the snowplow, we got off the road as much as we could, then shoveled, so other people could get past us if they tried to get through while we were parked there.

We borrowed a toboggan from Doug and used it to take in the heavy stuff. The battery alone was 130 pounds. With the box and other equipment, it was a bit challenging to get through the deep snow. I wore snowshoes but Kim had never worn snowshoes before and was hesitant to try. She tried to walk in my snowshoe and toboggan tracks but was breaking through up to her knees on every step. It was a lot of work and after about fifty feet, I encouraged her to go back and try the snowshoes. She had to figure out the adjustment to match her feet but soon she was experiencing the joys of walking through deep snow with far less effort.

It took us three or four trips but we got everything in, the steel fence posts pounded through the frozen ground, and everything assembled with the exception of some wires that came loose as we were jostling things into place. By the time we finished, about 4:45, we were starting to get some nice colors in the sunset.

It was on the cold side of normal: it was seventeen degrees when we arrived about 2:15 and when we left about 4:45, it was seven degrees. Kim, thinking ahead, brought a thermos with hot water. It felt so good to warm up my mouth and face by sipping on the cup of hot water when we would take a break.

Update: Brother Doug sent an email telling me that Kim and I were working on the property the day before the ninety-ninth anniversary of when my Grandmother Huffman (Sadie Carey at the time) and two of her sisters purchased the place. This land has been in our family ever since.

I have been having problems with the Boomershoot weather station since the first few hours after daughter Kim and I installed it. Hoarfrost that accumulated overnight immobilized the wind sensors.

There were other problems as well. The communication between the “indoor” part of the unit and the outdoor sensors was not reliable. I didn’t have a indoor environment for it. This indoor part uses an ethernet cable to connect to the Internet and a 900 MHz radio link to connect to the outdoor sensors. I put it in a plastic box that only barely protected it from direct exposure to the elements. And the insects, such as earwigs and yellow jackets, made it their home.

Sometimes the connection would go down just an hour or so after I rebooted things, got it working, and was on my way home six hours away. And then there was the time it stopped recording rainfall. It turned out a bird had pooped in the rain gauge and plugged it up.

I tried moving the sensor closer to the Internet connection unit without improvement. Then, when I visited just before Christmas, I decided it was time to purchase a new weather station. The wind sensors were immobilized by freezing rain.

I realize the manufacturer is based in Arizona, but they are making a product intended to be used to measure weather conditions. It’s not like I installed this sensor in Barrow, Alaska, or something. Sure, this is a bit hostile, but it shouldn’t be unexpected to the designers.

Last weekend, I installed a new weather station and made the “indoor” environment a little better. It’s not really a coincidence that I end up doing the weather station thing in January. But it is a hardship. But this year I was able to drive—instead of snowshoeing like last time—into the shooting line where we have the weather station . . . after I shoveled a path through a berm in front of the driveway.

It was just above freezing temperatures and frequently raining while I worked. Moving 130 pound batteries into the pit and connecting all the wires was less than fun. I kneeled in mud to work on things. But the end result looks pretty good. I insulated the lid. With the underground environment and some heat from the batteries and electronics, the temperature should be less extreme both in the summer and winter.

Spikes over the rain gauge of the new outdoor sensor array are supposed to keep birds from sitting on the edge and building nests in it. I don’t know that the wind sensors are more resistant to frost and freezing rain, but I know the old one didn’t tolerate those conditions well.

It’s been almost a week now with no interruptions in service to the Boomershoot live web page.

The webcam can be seen at: boomershoot.com

Joe Huffman was raised on a farm a few miles northwest of Orofino. Grades one through eight were at a nearby two-room schoolhouse with two teachers. He received a BSEE from the University of Idaho and a MSEE from the University of Washington. He now writes software for the cyber threat intelligence team of a major corporation. Joe has three adult children and one grandchild. His hobbies are guns and explosives.
View all posts by Joe Huffman →
ORDER BY MAIL