Posted on by Kevin McNeill

Inspiration for a Novel

It looks just like the high country around Alexandra.” That was how I described Idaho over the phone to my wife, Sheila, comparing it to the region around that small town on the South Island of New Zealand. Alexandra was a real-life Shangri-La as far as we were concerned, located close to where we lived and worked in Dunedin. This was 1991 and I had just been offered a position with a construction firm in Boise. We were considering several offers at the time, and I had no way of knowing if Idaho was the right choice for us, seeing as how we would have to uproot our family and move halfway around the world.

When we arrived in Boise, however, Sheila was certain. “There’s no question we made the right decision,” she said, “now that I’ve seen the Boise River.”

Fed by reservoirs filled with the winter’s snowmelt, the river runs high and deep in spring, clear and low in summer, and shallow in autumn. During spring run-off, the river scours its bed and banks, which is helpful to the rafters and fishermen of summer. Our favorite time became autumn, when yellow leaves floated on the cold, crystalline water of quiet shoals and pools where trout fed on late-season hatches. Fall was also when wildlife prepared for winter. Birds flocked together in the evening, readying themselves to depart by night for warmer winter residences. Deer were more evident, migrating from the hills down to the valley, and other animals followed.

When the boys were away in school, we would walk in silence along the nature path in southeast Boise, the steady voice of the stream our constant companion. At times it would flow low and noisy, the water gurgling over stones and around boulders. Other times the river would be high and nearly soundless, its bed entirely submerged as it rushed with a low rumble.

One fall day, as we strolled the unpaved nature path under a clear windless sky, enjoying one of the last warm afternoons of the year, Sheila surprised me by saying, “You really should write, you know.”

“Well, I write for work. All kinds of reports. They require creative energy.” But the seed was planted. I considered, hadn’t I wanted to write fiction my whole life? Being a prolific reader hadn’t helped. The problem was I couldn’t settle on a topic. 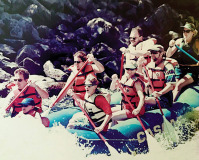 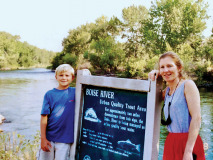 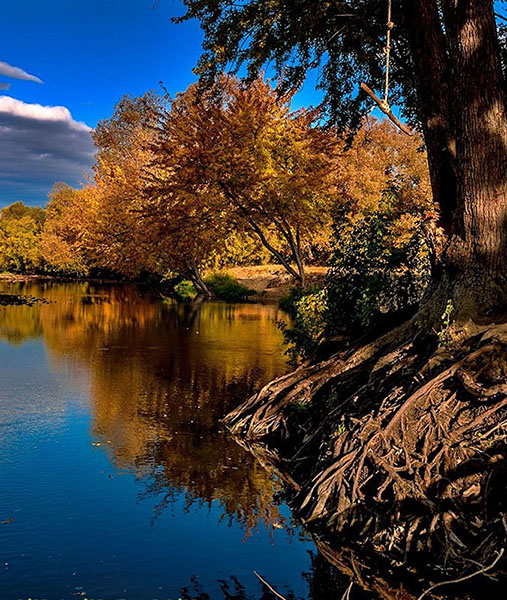 The family rafts the Payette River in 1996, with Dave at the front. 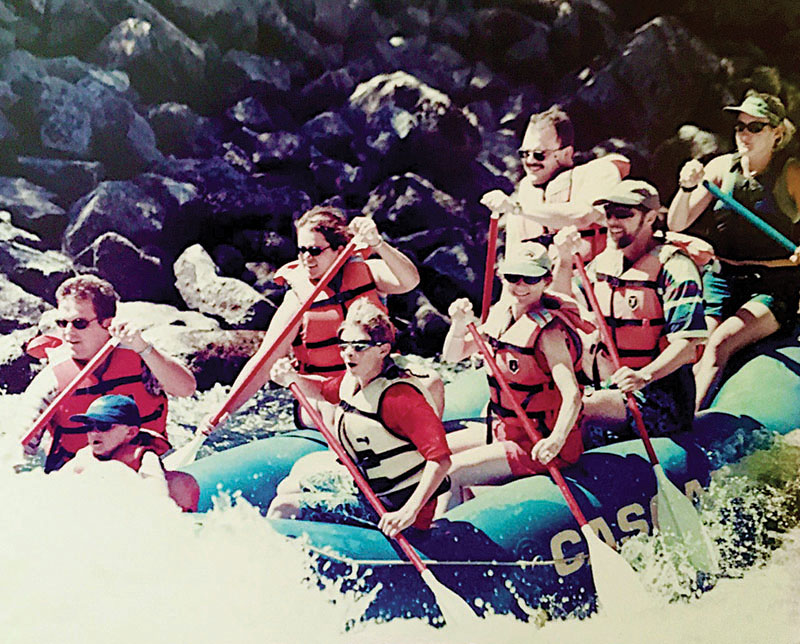 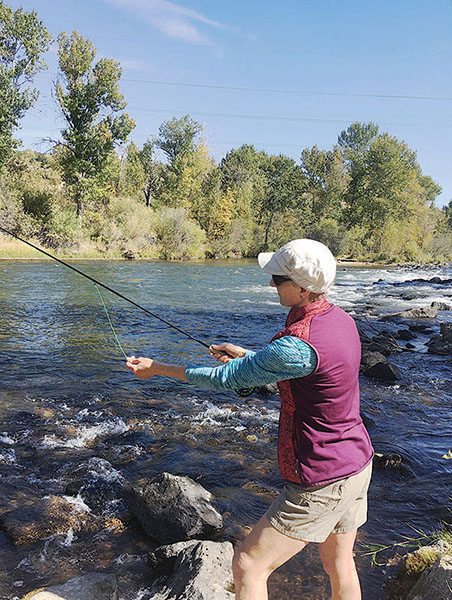 Sheila and Kevin McNeill at the Boise River. 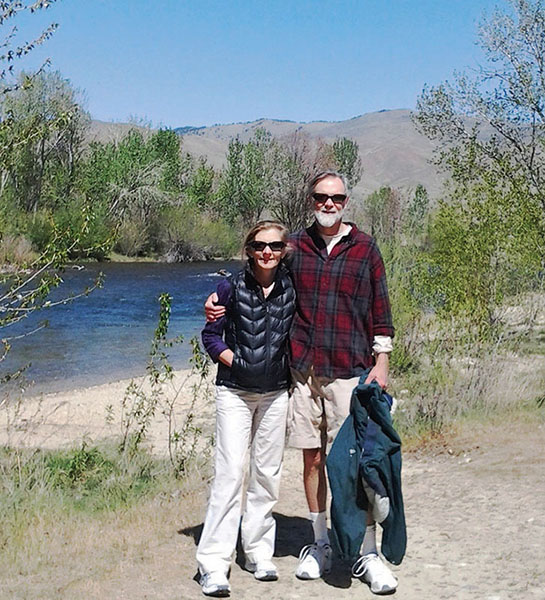 Dave as a youngster with his mom. 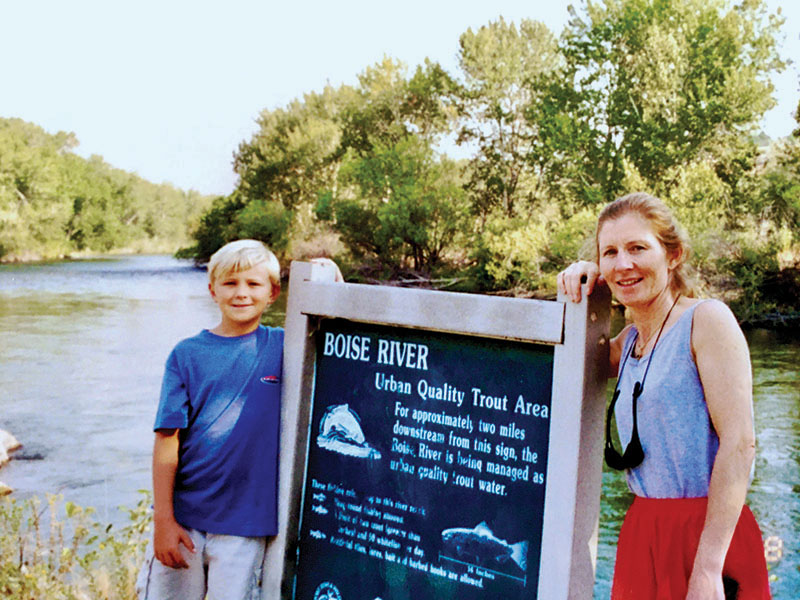 Interrupting my thoughts, a herd of deer burst from the underbrush. While it wasn’t unusual for fishermen to disturb a group of deer bedded down for the day, in their flight they normally shied away from people. These didn’t. They bolted straight across the shallow river and —just as we were bracing ourselves to be trampled—they stopped, only fifteen feet in front of us. They were so close we could see their sides heaving from exertion and their eyes wide with fright.

Sheila looked at the other bank. “Cat,” she said, pointing.

Some fifty feet away, in the space vacated by the herd, an enormous mountain lion stared at us and the panting deer. Its prominent shoulder muscles tensed under its sleek tawny coat. I could almost read its thoughts: “Hmm, deer on the hoof. And what about those two strange skinny creatures?”

We slowly backed away from the deer. Fortunately for us, the cougar must have been well-fed, for it couldn’t be bothered to leave its side of the stream, and slunk back into the brush. When we were back in the safety of our home, Sheila said, “It just occurred to me why the deer stopped so close to us.”

“Because they knew they were faster than us.”

One mountain lion encounter couldn’t dent our enthusiasm for the river. Even after the Boise construction firm I worked for went bankrupt and we returned to living overseas, we kept our home, where we would come back every year to spend at least a month and explore the beautiful state. Perhaps what was most indicative of Sheila’s love for Idaho was her choice to return to Boise permanently in 2002, when I took early retirement. While overseas, my wife had been diagnosed with Stage IV breast cancer. The median life expectancy for such a diagnosis is three years. Sheila would live for another twenty-one years, earning her nursing certification again after being away from work for nearly all of the time she had spent raising her two sons (and becoming a feared competitor in local golf tournaments). She had been born in Ireland and was raised on a dairy farm in Wicklow, but she considered Idaho to be her home. It was where she wanted to heal, and to finish raising our boys.

A tribute to her success was that she lived to see our elder son, Michael, become a physician, and to see the younger one, David, be chosen to give a presentation at an international robotics conference in Germany.

Inevitably, Sheila’s condition declined. After a 2012 visit to the Biltmore Estate in Ashville, North Carolina, she suggested that I write a book about the nineteenth-century orchid hunters who had furnished the original orchids for the estate’s orchidarium. I suspected she knew what lay ahead of us and was offering me a chance for a diversion. I embraced the opportunity to write the book and enlisted our son David as my editor. My friend and colleague, Tim, agreed to come onboard as well. He provided a ready ear and excellent research assistance, along with several draft chapters.

My lovely wife, who impressed all who met her with her upbeat, fun-loving personality and grounded spirituality, passed away peacefully at home in Boise in 2019. Close to the end, she confided in me that she no longer wanted her ashes to be spread in Ireland, but in Idaho. I thought of that first phone call to her describing the state, when I hadn’t been certain of which offer to take. Without hesitation, she had said, “Take the Idaho job.”

Sheila enjoyed reading the many drafts of the novel we presented to her. We had difficulty with the very end of the story and not long before she passed, she helped us find the answer. The protagonist, Nate, is in jail facing execution. He realizes that his only legacy will be the memories others have of him. He wonders in how many of those instances he chose to serve himself when he had the chance to fight for others. He hears a familiar sound, that of a friend. Sheila suggested that the novel’s last line should be, “Nate smiled.” I like to think he smiled not because he realized he would be saved, but because he knew he had a chance to fight one more time.

The historical adventure novel, The Orchid and The Emerald, set for a March 29 release by Blackstone Publishing, is available on audio (CD, MP3 CD and digital download), eBook, in hardcover and large print. A third of the authors’ proceeds will be donated to the Breast Cancer Research Foundation. This is the first book in the Orchid Hunter series by Timothy David Mack, the pen name of Kevin McNeill, David McNeill, and Timothy Wendland. 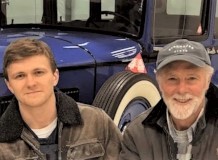 Kevin McNeill earned graduate degrees in engineering and worked as an officer on a blue-water research vessel, an associate partner with a New Zealand consultancy, an oil company consultant, and an environmental engineer. He is retired and writes full-time from his home in Boise. His son David earned an English degree from Yale University and a Masters in computer science from Boise State. He works as a software engineer in Boise and writes fiction in his spare time.
View all posts by Kevin McNeill →