Our Town on the Fourth

Posted on by Conrad Vogel

For this issue, we asked our more than 20,000 Facebook followers to send in images of the Fourth of July in their hometowns. Some of those shots are on these pages, and Clark Fork resident Conrad Vogel added commentary that deserves publication.

My earliest memory of Clark Fork on the Fourth of July is walking in the parade with my older brother and sister when I was six. I was Johnny Appleseed. The last time I was in the parade, I drove my ‘58 GMC truck. I’m forty-three and have been in Clark Fork most of my life, graduating from Clark Fork High School in 1988. The Fourth hasn’t changed much here over the decades. 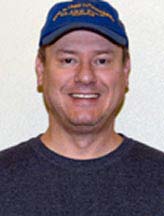 Conrad Vogel grew up in Clark Fork and graduated in 1988 from Clark Fork High School. After a few years living in Sandpoint, he moved back to his hometown. His son will be a sophomore next year at the high school, where Conrad is the varsity boys’ basketball coach. In the summer, he enjoys hiking to the tops of the local mountains and staying at fire lookout towers.
View all posts by Conrad Vogel →