A Christmas Flood on Pine Creek

Gusty winds and sleet pelted our faces as we leaned forward to climb the steep slope through heavy, wet snow. My brother Phil and I grasped slick brush to pull ourselves up the mountainside. Burdened with heavy packs, we traveled slowly, and we had hours and miles to go. Heavy rains propelled by sixty-mile-an-hour gusts of chinook winds had begun the day before and were now rapidly melting the deep snow. Pine Creek was a raging torrent of angry, muddy floodwater. The main road up the creek was no longer passable, because the approaches to four concrete bridges had been washed out. Residents of the East and West Forks, who lived south of Pinehurst in Shoshone County, were isolated, without electricity or telephone service. The wooden bridge to the West Fork was washed away. How could Santa possibly find his way up the creek on this Christmas Eve of 1964?

Weeks earlier, weather conditions had lined up for a critical weather event when a Nordic cold front, commonly known as the Siberian Express, channeled its way out of Alaska. Temperatures plunged to forty below zero. The ground froze like permafrost and any moisture that fell could not be absorbed into it. The temperature hovered below zero for two weeks, until December 22. That was when a warm, moisture-laden air mass we called the Pineapple Express moved in from the south and collided with the arctic cold front. The freezing cold quickly moderated but this collision resulted in blizzard-like conditions that dumped two feet of wet snow overnight in lower elevations. The pressure from the impacting weather fronts generated the high chinook winds that forced in spring-like temperatures along with monsoonal rain. As the snow quickly melted, all the draws and canyons came alive with torrents of gushing water.

“Jim, the water is too swift to cross the draw here,” Phil said. “I think we need to climb to higher to get around it, or maybe find a windfall to cross on.”

“Good idea,” I replied. “Maybe we should go over the top of Pine Point instead of slabbing around the hillside.”

We trudged on, climbing higher and higher through the melting snow, as wind and sleet continued to blast us. Hunched over, we eventually worked our way to the head of the draw, and were able to proceed up the canyon. Although nearly soaked to the bone, we were determined to make it to our destination. It was too late to turn back now. 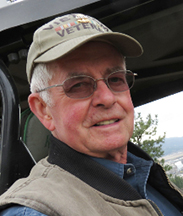 Jim Shubert was born in Kellogg during the 1940s and grew up in Pinehurst. He graduated from Kellogg High School, attended Lewis-Clark State College, and served in the U.S. Navy and in Vietnam. He retired as company fire chief from Potlatch Corporation in St. Maries, after thirty-three years of service.
View all posts by Jim Shubert →
ORDER BY MAIL