A Personal Recollection of the Great 1910 Wildfire

Recently, Craig Hahn of Warrenton, North Carolina, wrote to say he and his family members found a story in his mother’s papers after her death, which he retyped because he thought “based on its snapshot of life in 1910 in Idaho and the account of the great fire, it may be of some interest to you and the readers of IDAHO magazine.” In this stirring memoir, “Daddy” is Craig’s great-grandfather, George Walker Walker, who emigrated to Minnesota from Ontario, Canada, in 1895 and married Mary Josephine Brown. They then moved to Wallace, where he became a manager at the Formosa Mine and later a judge. The couple owned three houses in Wallace and a ranch just across the state line in Montana, where the family was staying when the great fire broke out in the summer of 1910. Their five children included Craig’s great-aunt, Mary Dorothy Walker Green, who wrote this piece in 1959. Her brother, George Nathaniel Thomas Walker, was Craig’s grandfather. A University of Idaho law school graduate, George became close friends with a few up-and-coming stars who frequented northern Idaho and Spokane in the 1920s, including Bing Crosby and Phil Harris. George enlisted in the US Navy in World War II, participating in the invasion of Manila Harbor, and later in life served as Assistant Librarian of Congress. Craig says his mother passed along many stories about her father and growing up in northern Idaho, but she never told this story. IDAHO magazine is pleased to present it.

As soon as school let out in June 1910, Daddy loaded us into a canvas-covered wagon and we set out [from Wallace] for our ranch in Sanders County [Montana], near the railroad station on the Northern Pacific called Belknap.

This lies in the beautiful Clark Fork River Valley, the water-level route for the railway through the Bitterroot Mountains. We crossed the mountains over Dobson Pass, used by the stampeders in the 1883 gold rush to Eagle City and Murray, Idaho. Our two horses, Ginger and Babe, made such good time that we reached the ranch in two days. The house was built from undressed lumber, and papered with old newspapers full of vigilante hangings and gunfighter duels. In a closet we found a stack of Black Cat magazines, which many years later I was surprised to learn was a classic for adventure stories. No wonder the stories we read aloud from them were so good—Jack London, Richard Harding Davis, and other famous writers sold to it.

There was a cistern and well, long since gone dry, and a pile of empty whiskey bottles that nearly reached to the second story. A magnificent forest of white pine surrounded the little clearing in which the house sat. There, we spent many afternoons trying to put salt on grouse’s tails. The birds managed to keep just ahead of our outstretched fingers. We never tried to shoot the birds, though we had an old pistol. One day George shot a frog and ran in the house with his trophy crying, “Muzza, (Mother), I shot a frog and it died suddenly.” This was a family anecdote for years. 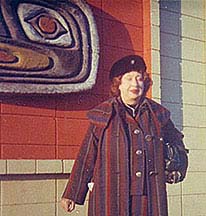 Mary Dorothy Walker Green was born in Wallace in 1901 and died in Washington state in 1982. A teacher, she was married four times, in 1926, 1929, a third time at an unknown date to Tyra David Green, and in 1979. The memoir of her childhood published in this issue of IDAHO magazine was written in 1959.
View all posts by Mary Dorothy Walker Green →
ORDER BY MAIL