Rescue from the Meat Farm

Posted on by Peter Rork

The call came from Dee Dee Bowring, Shelter Manager for Idaho Humane Society (IHS) in Boise. Humane Society International (HSI) was on the ground in Korea, where a dog meat farm near Seoul was being shut down.

The dogs would be transported to San Francisco. IHS had agreed to take twelve dogs after they arrived in the U.S., but there was no way to transport them from San Francisco to Boise.

The nonprofit group I co-founded, Dog Is My CoPilot (DIMC), has worked for years with IHS, among other receiving organizations, and we always try to accommodate the society’s needs, but our problem was that I already had a rescue flight scheduled, which conflicted with the dogs’ availability to leave the Bay Area. And I’m our group’s only pilot.

The Korean dogs had been quarantined for thirty days in that country before their arrival in San Francisco, because these animals probably had never had vet care or much human contact at all, for that matter.
After a hasty telephone meeting with our executive director, Kara Pollard, my flight schedule was rearranged. I would fly the Korean dogs from California to Idaho.

Before leaving, I visited the Facebook postings of HSI and saw the terrible conditions in which the dogs had been kept. In the photos, the rescuers held a few of the smaller dogs, and they were beautiful. I was sure IHS would have no problem placing these guys once they arrived in Boise. But there was work to be done first. These dogs clearly had a long way to go before they reached their Idaho homes. I knew the devoted group at IHS would see them through, but because of the dogs’ very recent introduction to interactions with humans, they would need special handling. 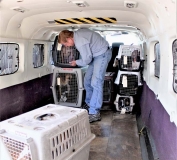 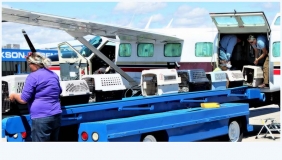 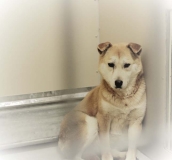 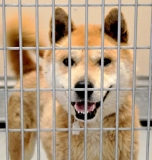 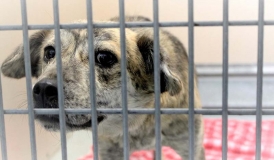 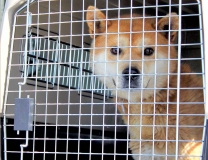 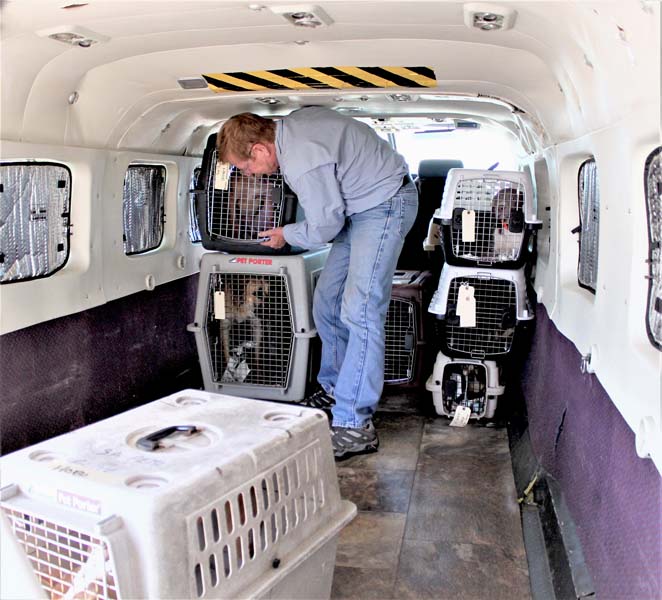 Unloading dogs with a luggage conveyor. 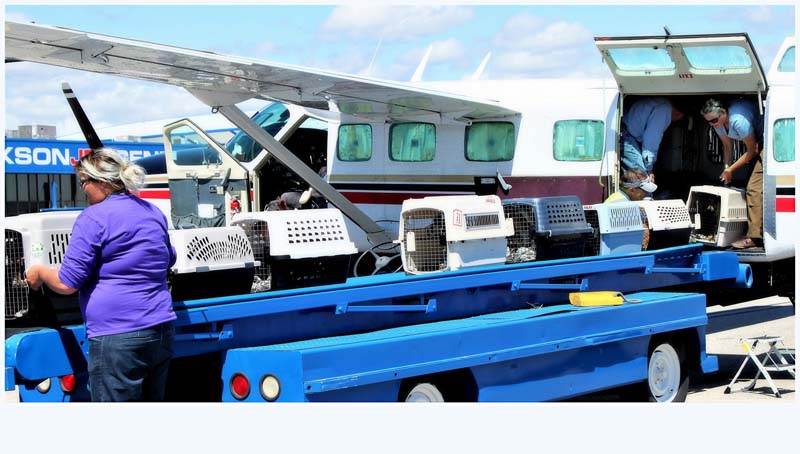 At the airport in Boise . 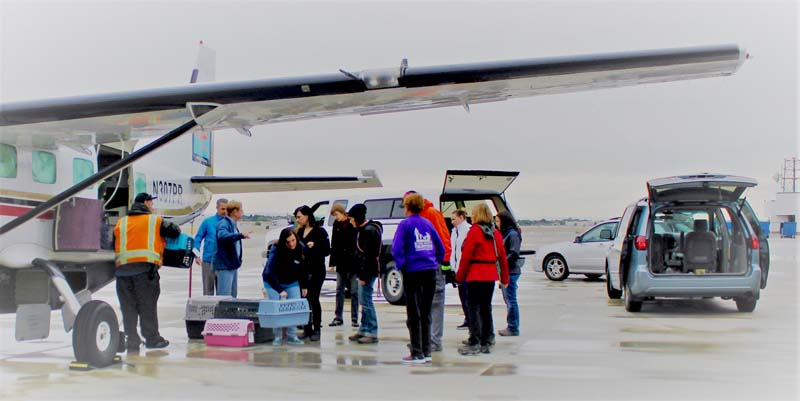 A lucky dog from Korea gets his first view of Idaho. 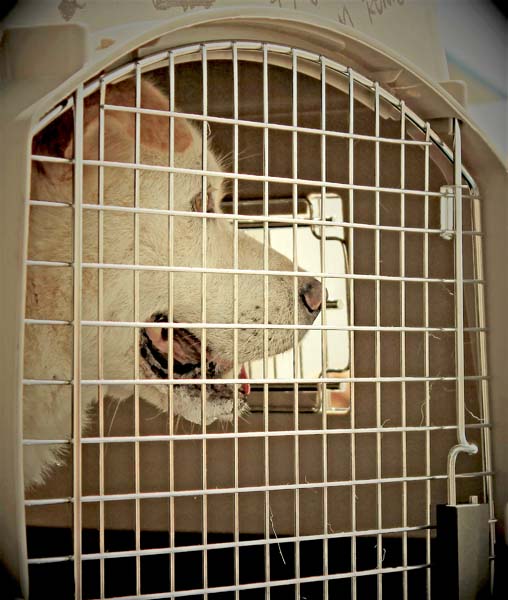 All hands on to unload a large dog in Boise. 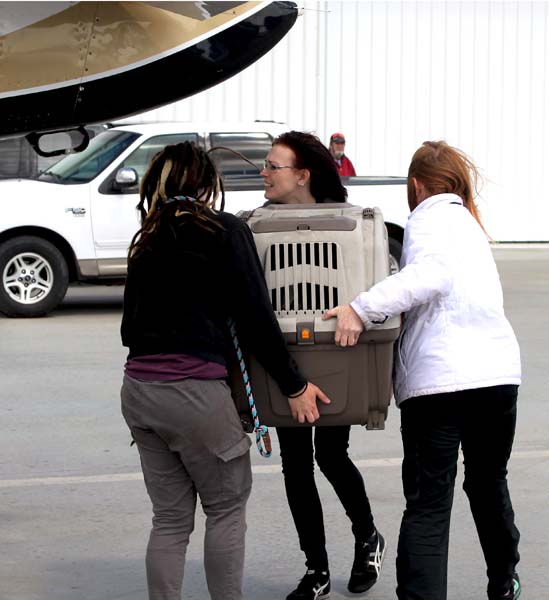 Behind bars for now. 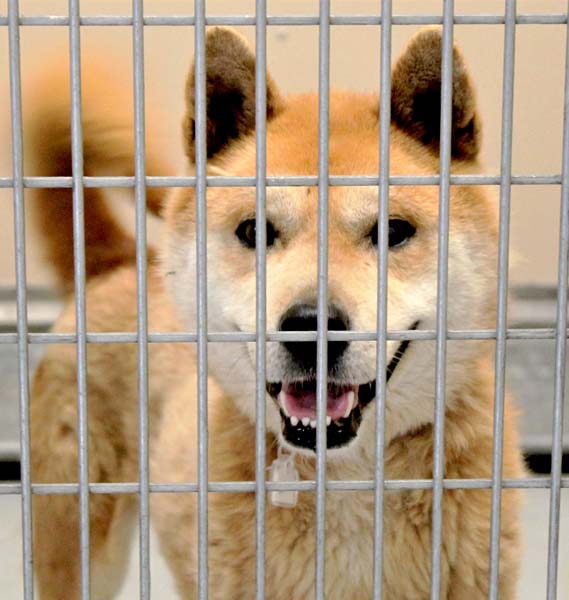 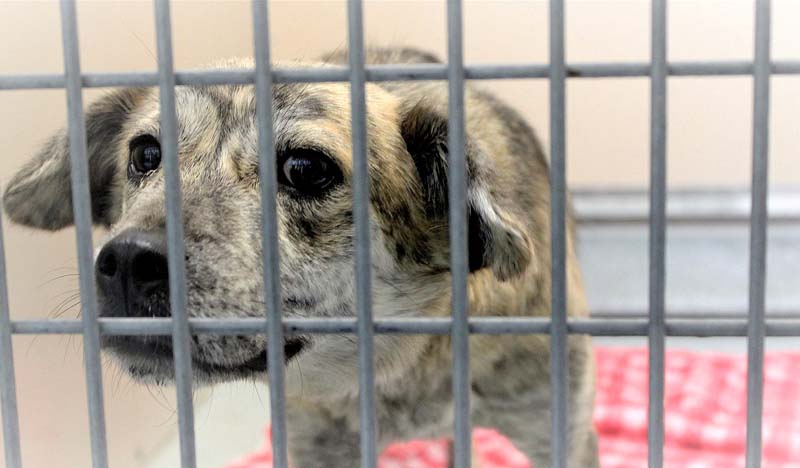 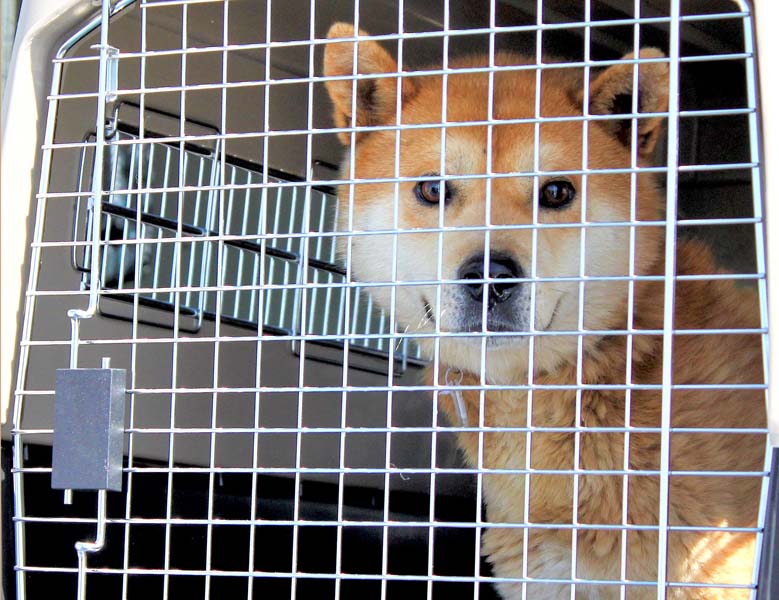 I flew to Oakland on June 1, 2017, and the following morning met Marti Watts, director of the San Francisco Humane Society. She had fostered the dogs for the two days they had been in California, and when she delivered them to me, I noticed right away that the crates were significantly oversized. I started working out the puzzle video game I play in my head every time I load the aircraft. But as I got closer to the dogs, another issue arose: my olfactory senses were overwhelmed. Far from the typical dogs that I fly, these animals had probably never been bathed in their lives. Oh boy! We quickly loaded the aircraft, and for the next three hours, the dogs and I breathed the same odiferous air. That was a challenge, and I was grateful I hadn’t had any breakfast.

We were greeted by Dee Dee and her dedicated crew, appropriately nicknamed “The Posse,” at the Jackson Jet Center, our fixed base operator and host for all of our rescue flights into Boise. Many, many of our rescues go to Boise, a very dog-and-cat-friendly community.

The passengers were quickly unloaded, the aircraft fueled, and I was on my way. The aircraft interior received a vigorous cleaning that evening. I can’t imagine how many baths it took to get the smell off those poor dogs, or what it must have been like to give a dog a bath that had probably never had any bathing or handling. All I do know is that it was an honor to play a role in a rescue that spanned oceans and continents.

My life has been filled with the love from and for dogs. I’m a retired orthopedic surgeon who first practiced in Sun Valley. My career began on the East Coast, where I got my pilot’s license at age seventeen and worked my way through medical school doing sightseeing tours, charter tours, flight instructing, you name it. After internship, residency, and a fellowship, I ended up in Jackson Hole, where I spent most of my career as a knee and hand surgeon, but I maintained a continuous connection to Idaho.

After retiring in 2012, I contacted Judy Zimet, a friend and an attorney, and told her I wanted to start a nonprofit and try to transport large numbers of rescue animals. Judy specializes in nonprofit companies, and, fairly quickly, DIMC was whelped. At that time, I was flying a Cessna 206. When I pulled out the seats, we could fly eighty-four cats or lots of small dogs, but I’m a big-dog kind of guy, which meant I needed a bigger aircraft. My oldest daughter Taylor, who’s an attorney, said, “Dad, do it, just do it. You’ll be able to save so many more animals,” and that pushed me forward.  We located a Cessna Grand Caravan 208 in Canada for sale from a collapsed oil company, and it seemed designed to do this.

Since then, I’ve flown dogs and cats to shelters in the Northwest from other states where they were on euthanasia lists because of severe overcrowding, but I never could have imagined that I would be able to help on an international level.

When the dogs from Korea arrived at IHS, they were placed in quarantine for medical observations, to be away from the noise of the facility’s other animal population, and to keep them from public view. IHS has been working on gaining their trust for socialization and to teach them basic obedience. Even though the dogs had lived in the same small outside area in Korea, they had been on chains and out of reach of each other. I’m told that when a dog bed was placed in the kennel of one of the dogs, he cautiously examined it, touched it with his paw, and eventually curled up on it. Clearly, this was his first experience of the luxury of a bed.

The rescue flights always draw attention, and many people feel I’m a hero for the thousands of dogs and cats DIMC has rescued from certain death, but I’m just the pilot. The real heroes are the Dee Dee Bowrings and Marti Wattses of this world, and their staff and volunteers who show up every day to work with these animals, feeding, bathing, socializing, and addressing whatever behavioral issues they may have. And eventually finding for them what we like to call their “furever homes.”

For more information, visit Dog Is My CoPilot at dogcopilot.org. 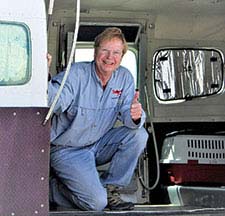 Peter Rork is an East Coast refugee who always believed he was switched at birth with a kid from New Jersey. After working his way through medical school as a pilot, he practiced orthopedic surgery for more than thirty years, and has returned to the skies as chief pilot of the nonprofit he co-founded, Dog Is My Copilot. Qualified to fly single and multi-engine aircraft as well as seaplanes, Peter also is a certified flight instructor. He says the view from his new office beats any other.
View all posts by Peter Rork →