Posted on by Link Jackson

A Rare Float on the Best Wilderness River in America

Story and Photos by Link Jackson

The odds of drawing a permit for a launch on northern Idaho’s Selway River, protected by the federal Wild and Scenic River Act, are slim.

The Selway is viewed by many as the crown jewel of wilderness river trips in America and I rarely even bother to apply for a permit, choosing instead to focus on rivers that offer a higher probability of success. This year, at about the same time I got all my rejection notices from river lottery drawings across the West, I received a message from my friend Steve Harkins that I’ll not soon forget.

“I got a permit on the Selway for July 6. Do you and Becky want to go?”

It took me about a second to reply yes. Wow. The Selway. A river of crystal clear waters and wild untamed rapids, moving through a mystical wilderness of dense forests, legendary populations of native westslope cutthroat trout, legendary populations of big timber rattlesnakes, and very few other river travelers, because a Forest Service management policy allows only one group to launch each day.

This would be my second trip on the Selway. As our launch date approached, we firmed up the crew at fifteen, with seven boats in the fleet. We assigned gear responsibility to each member of our team, divided up food responsibilities, arranged for shuttle drivers to move our vehicles a couple hundred miles to the take out, and generally got our act together. Our crew would include two oarsmen who spent many years guiding on the Selway River. On a river like this, it is a big advantage to include such wise individuals, who can provide leadership and direction for running the wild rapids safely. And wild they are, as names like Ladle, Double Drop, Little Niagara, and many others attest. 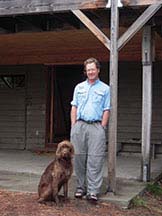 Link Jackson was born in Montana and raised in the Northwest, settling in Idaho in the fifth grade. He graduated from Boise High School and the College of Idaho. His career includes twenty-five years in the construction and development field as partner and CFO for various entities. He now owns StreamTech Boats and Linkjacksonart.com.
View all posts by Link Jackson →
ORDER BY MAIL