Posted on by Bob Abrams

Story and photos by Bob Abrams

During round one of the Owyhee Motorcycle Club (OMC) summer motocross series in Garden City last June, I was in the right place at the right time. I was crouching at the back of the track behind a large feature called an off-camber roller when two young riders collided in midair. This feature is an interesting addition to the track, a place where a rider can slow down to reduce speed or race through it and jump a significant length to make a pass. In the heat of battle, neither of these two riders backed down. They both charged into the ten-foot-high roller and blasted off.  I was photographing the pair when it happened. One of the riders was knocked sideways in midair but managed to stay upright and ride away. The second kid, a twelve-year-old, crashed and was trapped under the motorcycle.

I rushed to help him get back on his feet. The combination of fear and resolve I saw in his face was typical of these kids, yet it never ceases to amaze me. As I worked to get him out from under the bike, I saw he was physically shaken but okay. He said only one thing to me, and it was the definition of determination: “Can you help me start my bike? I have to finish the race!” 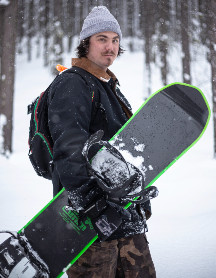 Bob Abrams is twenty-seven and resides in Nampa, were his life is “full of adrenaline.” Action sports, photography and fly fishing consume him. Bob currently works with HVAC while pursuing his passions in his free time. His participation in action sports has led to “several near-death experiences,” which is why he’s thankful to still pursue and document “the gifts of life.”
View all posts by Bob Abrams →
ORDER BY MAIL