Posted on by Francisco Lozano

Transformed in the Woods

Story and Photos by Francisco Lozano

Two years ago, I once again took up watching the old TV series Little House on the Prairie. When I first saw it as a child in black-and-white, the program spawned fantasies of living in the wilderness.

But I lived in Los Angeles, and remained there for almost thirty years, until my wife and I moved to Garden Valley in 2012. No sooner did I realize we would relocate to the mountains of Idaho than I started watching that old show again, as if it would prepare me mentally for the change of habitat and the cultural shock I was about to experience.

Nowadays, I often find myself going alone into the wilderness, and have learned to cherish this solitude, although I realize it can be dangerous at times. Some places are accessible only by ATV or motorcycle, unless you have a horse, and on those occasions even my dog can’t come along. I now do some of the same things the children on the show did, such as going fishing alone at a creek with a lunch sack and sometimes with the dog. I had never fished in my life and, to my surprise, I caught two trout the first time I tried. 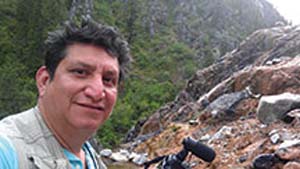 Francisco Lozano moved to Garden Valley with his wife Donna in 2012. Born in El Salvador, he immigrated to Los Angeles in 1984. A former pastry chef, he also studied photojournalism at Los Angeles Community College, and says he is “loving Idaho’s outdoors and photographing it.” See his work at franciscolozano.zenfolio.com
View all posts by Francisco Lozano →