Posted on by Holly Montgomery

In winter the landscape outside my windows in Clearwater sparkled in white like a painting on a china plate from a past era. In spring, my home’s interior spoke a different story. As I entered the living room through the front door one rainy afternoon, a cloud of malodorous air greeted me. I thought the Corgi had peed on the carpet. She had forgotten the house rules in her old age. At twelve and arthritic, she often let loose a steam just inside the front doorway.

Retrieving a razor knife from the kitchen utility drawer, I crouched down on my hands and knees, slit open a small piece of carpet near the front door and inhaled a lungful of air. The odor hadn’t originated there. As it turned out, the stick-built office addition tacked onto the bedroom of my trailer house was the culprit. When I opened the door in that room, an invisible cloud of mold and mildew greeted me. The roof had leaked and water had dripped into the walls of the windowless closet. My heart sank. I wasn’t sure what might have been damaged in the closet, where I stored things I couldn’t part with but were no longer relevant in my day-to-day life.

Unloading the many stored cartons and airing their contents would require a plan. The living room couch provided a perfect spot for investigating the soggy-bottomed containers that had resided in my various back closets over the previous thirty years. The contents were a bit of a mystery until I began unloading them. I sorted stacks of photographs, old letters, books, and family picture albums and dried them on my front room furniture and floors. 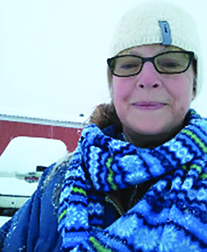 Holly Montgomery is a fourth-generation Idahoan. She earned degrees from the University of Washington and the University of Montana, and lived in Montana for nearly forty years. She retired in 2014 and now lives on a five-acre farm near Clearwater. Holly enjoys writing, reading, and corresponding with her three grown children. Her partner in all this intrigue is a local musician and carpenter.
View all posts by Holly Montgomery →
ORDER BY MAIL