Sound and Light at Grays

Posted on by Kris Millgate

You can turn a lousy dinner of cottage cheese and crackers into a delectable dining experience if you crack open the portable packaging at the right time, in the right place. In this case, it was Grays Lake National Wildlife Refuge at sunset.

My colleague Jay Krajic, a videographer, reminisced with me recently about our evening shoot there. “Sitting on the edge of the marsh eating dinner was cool,” he recalled. We had used every hour of daylight to capture the natural beauty of Grays, only stopping for a few minutes to eat at the edge of a pond. All the bugs and birds serenaded us with a symphony of their own sweet sounds.

“It was so cool to just sit there and not have any other noise but frogs and birds and a little bit of wind, and watch the clouds and just really enjoy a nice peaceful spot,” Krajic said, a slight smile reaching his eyes.

Grays Lake, near Soda Springs, is one of six national wildlife refuges in Idaho, and is home to the largest hardstem bulrush marsh in North America. It also is home to the world’s largest nesting population of greater sandhill cranes. The water, meadows, and hills comprise an irresistible combination for wildife.

For me, though, right before sunset on that day was a far cry from peaceful. I sat rigid, knuckles white, in the passenger seat of a SUV, questioning Krajic’s abilities behind the wheel as he drove uncomfortably fast on a pitted dirt road. The screws holding the vehicle’s doors in place seemed to be unthreading with each rut he hit. We dashed to the west side of the refuge to get a sunset shot, but with only ten minutes before the clouds lighted up, he decided the north end was better and raced back to where we started.

“The moon is always good when the sun is setting like this,” he said while flipping a U-turn in the middle of the dusty road. 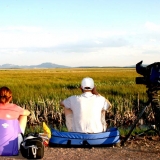 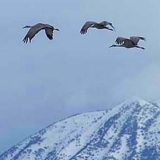 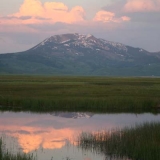 The author and Jay Krajic at the edge of the marsh. Kris Millgate/Tight Line Media photo. 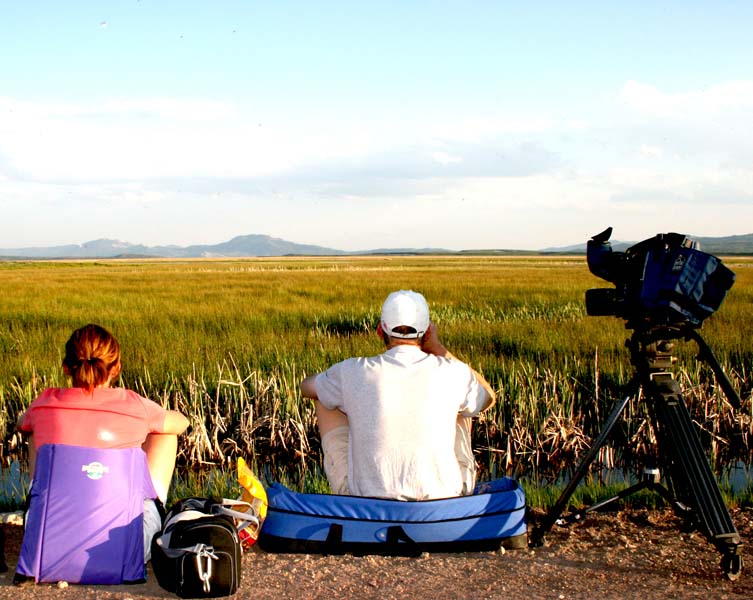 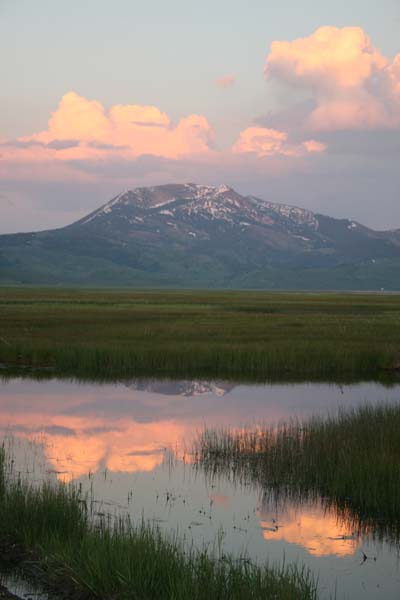 We found a wide shoulder on the side of the road, claimed it as our parking spot, and unloaded gear as fast as possible. Our dinner was included with that gear. It wasn’t a fancy feast but as the only option in a pinch, it tasted perfect. A few sandhill cranes in that perfect light would really make our day. We had played chase with them for hours.

“I have been looking for sandhill cranes for thirty years and you can never get close to them,” Krajic told me while scanning the marsh for cranes. “They are impossible to get video of, and they’re impossible to take a picture of, because they’re never any closer to you than three hundred yards.”

About 250 pair of sandhill cranes nest at Grays Lake NWR in the spring. More than two thousand migrate to the wetlands in the summer. The large marsh, offering plenty of cover for their colts, draws the cranes in.

United States Fish and Wildlife Service owns 4,500 acres at the refuge and manages another thirteen thousand acres owned by the Bureau of Indian Affairs. The water in the marsh eventually ends up on crops in Fort Hall, but it is taken advantage of by the refuge birds before it gets there. That’s why we were roadside at sunset wishing the wildife would cooperate.

“I feel like I’m shooting the same thing over and over, because cranes are always the same distance from you and they’re always walking away from you,” Krajic said as he chewed a bite of peanut butter and jelly on wheat bread.

We stopped chattering about the challenges of our day as our mouths filled with food, and that’s when I realized the peacefulness Krajic later recalled. I missed it at first, because I was only using my eyes. I needed to do more than look. I needed to listen, too.

I heard the raucous call of cranes in a camas meadow far off in the distance. I heard the throaty tone of toads in the swampy parts of the refuge closer to us, and I heard the continuous creak of crickets in the grass just beyond my feet. The sunset sky already had my eyes, but now the wild sounds of the refuge had my ears, and the acoustics were amazing. Music with a meal makes for a happy belly. Add a gorgoeus sunset to close out the day, and I felt complete, well beyond satisfied.

Trust me on this—keep your ears open when you have dinner at Grays. The sounds are just as wonderful as the sights. I know I’ll be sitting down with a cup of cottage cheese and a few crackers when I make a return visit at sunset this summer. {/private]

Kris Millgate is an outdoors journalist for whom the quiet cast of a fly line cures writer’s block. Many production ideas for her Tight Line Media company come from the time she spends in her Idaho Falls base camp. Her two decades of journalism experience and several cross-country moves prove she’ll go anywhere for a good story. See more of her work at: tightlinemedia.com
View all posts by Kris Millgate →