Posted on by Bill Phoenix

One thing people quickly learn about me is that I have “railroad blood.” My fascination with trains has been lifelong. When I was a toddler, my father Chilton Phoenix, a World War II vet, was studying law at Stanford University.

One day I wandered away from the student housing where my folks were living. Soon after, the search party my mother organized found me a few blocks away, in diapers, with my little red wagon, waving to a commuter train. Dad had once taken me there to see trains and wave at the engineer, so I knew the way.

Dad became a lawyer for the Union Pacific and our family moved to Pocatello, a perfect place to grow up, because the railroad had a huge presence there. When it came time to choose a career, I went for engineering—but not trains. I started as a health physicist in the 1960s at Idaho National Laboratory’s Advanced Test Reactor. Today I still work for the lab part-time, as a nuclear engineer at the Transient Reactor Test (TREAT) Facility. I tried retirement more than once but didn’t like it.

Still, I count myself as extremely lucky to have discovered a hobby late in life that satisfies the “railroad boy” in me. In 2012 my wife Kathie and I discovered “speeders,” and since then we’ve become part of a very specialized group of people. 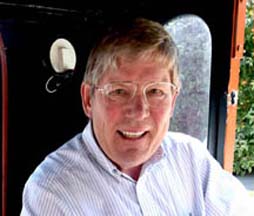 Bill Phoenix is an avid amateur trombonist and nuclear engineer whose career began at Idaho National Laboratory and took him throughout the United States and England, starting up commercial nuclear power plants. He and his wife, Kathie, returned to their roots in southeastern Idaho in 2003.
View all posts by Bill Phoenix →