My introduction to the Givens Hot Springs story began when Troy, my husband of almost twenty-five years, and I had a day off together, which was a miracle. We decided to check out the hot springs area with our copilot terriers, Gus and Chloe. Loading them in the car was like having two small children again.

Troy responded to this with one of his stares. “We’re going to be gone for only a day. You’d think we had grandkids instead of dogs.”

As it turned out, we didn’t make it to the hot springs on that trip. Right before the Highway 45 turnoff that goes to Givens is a small café and gas station called Dan’s Ferry Service, which includes a nature path that is a story in itself [see “Cleo’s Trail,” IDAHO magazine, February 2013].

We had been there years earlier, and I remembered the odd yet interesting collection of art pieces thrown out among the sagebrush and cacti. As we pulled up to park, Gus and Chloe peered over Troy’s shoulder and started salivating in anticipation of exploring. Unfortunately, we were greeted by a huge “ No Dogs Allowed” sign.

Looking about, we spied a peacock and a small donkey; new additions since we had been there, which likely explained the no dogs policy.

We turned into Highway 78 and pulled up to a campsite full of cool shade trees. When we saw another dreaded “No Dogs” sign and had to pull out again, the furry kids looked at us like we were insane and dropped to the seat to pout.

We came to a long cool drink of water called Bernard Landing, where the dogs ran like kids to the lunchroom on pizza day. I swear Chloe was smiling, but it could have been the heat. Bernard Landing turned out to be a great place for fishing and an easy boat access, with a single-lane concrete plank launch alongside a dock. 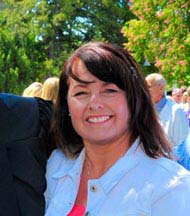 Dianne Buchta Humble is a freelance writer and photographer in the Middleton area. She has two boys, one a graduate of the Albertson College of Idaho and the other soon to graduate from Northwest Nazarene University. Dianne and her husband enjoy traveling and meeting the wonderful people of Idaho. You can catch her passion for fine art photography at dbhphotography.ifp3.com