Lessons from a Legend

Story and Photos by Jim Huntsman

This was a day I would never forget. It was a cold September morning in 2014, the kind in which you can taste the mountain fog. I was a good mile or so from the truck and knew of this small meadow’s existence only because I had stumbled upon it three days earlier. The hunt was a new kind for me: whitetail deer. The steep climb to get to it required me to rest a moment before setting up to hunt.

Every year, the excitement is the same. I had been launching arrows from my bow for months in preparation, but because of very little experience with whitetails, I felt a sense of uneasiness, questioning my ability to get the job done. I was a mule deer hunter, and had confidence with that animal, which I lacked with the whitetail. It was high time to change that.

My wife Nicole and I had moved back to northern Idaho after four years in Utah. I had recently reached the six-month mark here and could purchase a resident hunting license. We had missed Idaho. The crystal-clear rivers, perfectly blue lakes, and seemingly endless coniferous forests of the Panhandle were worth the risky career move. I was excited to be home, especially in time for deer season.

I set up in a thick copse of trees at the edge of the meadow. I had been told by an expert whitetail hunter that the animal was somewhat habitual, and it was best to sit in the early morning and watch. I propped my pack against one of the trees and sat down, giving myself a great field of view. Time passed, and the mountain began coming to life for the day. Suddenly, movement at the corner of my vision made my heart skip a beat. 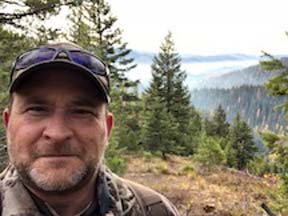 Jim Huntsman has lived in northern Idaho with his wife, Nicole, for twenty years. Together, they have four daughters, which Jim says explains his hair loss. He manages commercial roofing capital improvement projects. His passions include fly-fishing, hunting, conservation, and writing about all of it at thewesternhuntsman.com.
View all posts by Jim Huntsman →
ORDER BY MAIL