Posted on by Jack Greaves

Matt Gooch walks into the Crossroads at BYU–Idaho in Rexburg and immediately starts bouncing from table to table, chatting with everyone whose face he recognizes. He’s tall, probably around six-feet-three if he didn’t hunch. He keeps his arms stiff at his side as he walks about the room, as if to conserve energy for when he goes behind the drum set. He wears a tight, short-billed hat that makes him look like a bike messenger in Brooklyn. His swagger makes it clear in an instant who he is: he’s the drummer.

After listening to a piano and bass duet, Gooch places himself on the throne of the drum set. It has the basics: a kick drum, snare, floor tom, hi hat, a ride, and a crash cymbal. He plays a smooth piece, accompanied by a trio on piano, upright bass, and brass, and then leaps away from the set, taking a meandering path filled with compliments from bystanders and quick hellos to people he missed earlier. Then he beelines to my table.

“You’re Jack?” His voice is husky yet clear. 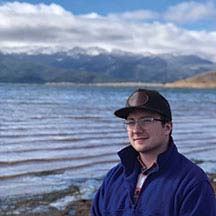 Jack Greaves is a senior studying advertising at Brigham Young University–Idaho in Rexburg. He’s from Portland, and currently works as a copywriter at Soapbox Agency and as a lab assistant in his campus’s Mac Lab.
View all posts by Jack Greaves →