Posted on by Erma Jean Loveland

In 1948, a Tough Introduction to Idaho

I learned an important lesson in the winter of 1948-49. Several years earlier, when Dad was drafted into World War II service, Mother, my sister Norma, then a first-grader, and I, a third-grader, were living in Indiana. We moved into town, away from farm chores. But now it was 1948, Dad was back from the front, and we had moved to a ranch outside Twin Falls, where he said he could use some help with the milking. As a seventh-grader, I was first in line to learn.

I placed a stool on the right side of the cow and grabbed hold of the “milk givers.” A swift, hard kick from the cow knocked me off the stool onto the ground. As I got up and backed away, I thought, “Oh, good, I can go to the house now. Dad won’t want me to be hurt by a kicking cow.” Dad had other ideas. He dusted me off, set me back down on the stool, and I started to milk again—successfully this time. That incident comes to mind even now when something happens that causes me enough problems that it is necessary to sit down and start over again.

My dad, Orval Alkire, was an Army veteran who served on Cebu Island in the Philippines. Jobs were scarce for the warriors returning to Greene County, Indiana. A couple named Houston and Lucile Owens, who were long-time friends of my dad and of my mother, Lenore, had moved to a newly-developed farming oasis in Twin Falls. The Owens liked what they saw and were successful in convincing my parents of the economic advantages of living in Idaho. 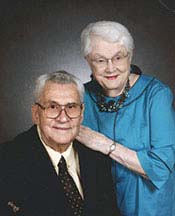 Erma Jean Loveland attended public school in Murtaugh and was valedictorian at Kimberly High School. She married Charles Loveland of Midvale, the grandson of Bertha Pickett Ader, who arrived in Idaho by wagon train in 1881. Erma Jean taught school in Buhl and Burley, and earned Masters degrees from the College of Idaho and the University of North Texas. Now retired, she was a librarian for nineteen years in Abilene, Texas. The Lovelands have two children, five grandchildren, and two great-grandchildren.
View all posts by Erma Jean Loveland →
ORDER BY MAIL