The Ghosts of North Fork

Posted on by Dana Stewart Quinney

Conservationist and biologist Dana Stewart Quinney grew up in Ketchum in the 1950s, where her father was one of the first fly fishing and hunting guides for celebrities who stayed at Sun Valley Resort. Wildflower Girl, Dana’s memoir of her awakening to the marvels of Nature, will be released by Hidden Shelf Publishing House on June 4. Published here, with permission, is the final story in that collection.

Of all Wood River’s tributaries, the North Fork is coldest, flowing from a cold canyon in a cold-wintered land, pouring the ice of its heart into the main fork between steep, dark ridges.

The North Fork comes clean down the pale, washed stones of its bed, too chill to support many trout. Even on a summer day, the sunlight falls on the water of the North Fork for only a few brief hours before mountain shadow displaces it to the tops of the aspens, then to the spearheads of Douglas fir climbing up the east ridge.

As a young girl, I knew North Fork Canyon because my father had a mine there. The mine was old, patented. Dad had not made the tunnels. They were fifty years old at least when he came by the place. The upper tunnel was hardrock and dry, but branching into two at once, so you were afraid to creep in very far; the green, fir-soft oval of the entrance shifted and winked out as soon as you chose the left or the right branch.

The lower tunnel was more inviting, being situated as it was hard by the dynamite shed and framed by graceful young firs curving away from the entrance timbers, which had been there before the trees. No hardrock here, not for more than a hundred feet in. The earth around the timbers was padded with cabochons of bright moss, emerald and topaz and peridot and garnet, and between the ore cart rails, water ran ankle-deep, pitted by droplets falling from the sodden timbers.

Dad hadn’t made the tunnels, but he shored them up, repaired the rails, beat out the dents in the old ore cart, got himself a carbide headlamp, and mined. Or more properly, he explored, for the North Fork claim never paid off.

Dad was wise to ore. He could read silver into the way things folded and cracked. I felt that he could smell the now-barren paths where gold had withdrawn from empty veins and could follow it to where it had loded up in some fat stope. Yes, he could, and proved it later, buying and selling old mines such as this one until he was able to retire early. But North Fork was the first, his teacher, great cracked shale mountain with miles of tunnels and shafts unaccountably opening here and there on slopes where there were no roads or even paths—here drowned in water, there laced with the bright desirable sparkle of galena ore. 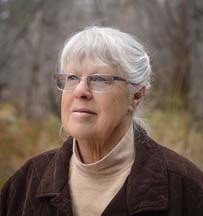 Dana Stewart Quinney grew up in Ketchum, enchanted by wildflowers and the small lives of wild things. She married after college and worked as a scientific illustrator, field research technician, golf-cart mechanic, high school teacher, and college instructor. For years she was the biologist for the Idaho Army National Guard, and later was Natural and Cultural Resources Manager for the State of Idaho Military Division. All the while, she kept writing.
View all posts by Dana Stewart Quinney →
ORDER BY MAIL