The Hawk Is Back

Story and Photos by Warren Clary

When my wife Jeanne and I moved from Boise to Meridian in 2005, we acquired a new house on a nice-sized lot. The house was positioned off-center, within about six feet of a five-foot-tall wooden fence that surrounded the side and backyards. The kitchen was on the side closest to the fence and the kitchen window was boxed out, so its glass was fewer than six feet from the fence.

One morning after living in the house about two years, we went to the kitchen and saw a hawk (which we later identified as a sharp-shinned hawk or sharpie, Accipiter striatus) sitting on the fence having breakfast and watching us through the kitchen window. I grabbed a camera, took several pictures through the closed window, and watched while the hawk finished eating. It took some time carefully cleaning and polishing its beak by rubbing both sides on the top of the fence. He or she then flew off, presumably never to be seen again. However, the same bird kept returning during spring and again during fall migration for the remainder of the years we were in Meridian. 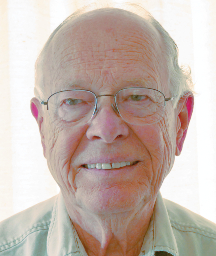 Warren Clary has been interested in birds of prey since childhood. During his career with the USDA Forest Service working in several research stations, he did technical writing, primarily about domestic and wild ungulate use of national forests. He lives in Reno with his wife of sixty-three years, Jeanne.
View all posts by Warren Clary →
ORDER BY MAIL