Hi, Todd. My name is Cynthia Johnson. Fresca is my sister and she gave me your name and number. Even though you and I have not met, I’m wondering if I could ride to Boise for the Highland Games with you? I’m writing an article about the games for IDAHO magazine, and I’d like to pick your brain for information as we drive. Fresca says you and Lyman are a wealth of knowledge! Please let me know. Thanks.

My request was accepted by Todd and Lyman Asay, and I traveled from Pocatello with them and their family to share the Highland Games in Boise, held in conjunction with the Treasure Valley Celtic Festival.

Such games, which are staged around Idaho and the U.S., consist of nine throwing events: heavy and light stones, weights for distance, sheaf toss, heavy and light hammers, clanchneart or stone throw, weight over bar, and caber toss. Todd, who is thirty-three, has been going to Scottish festivals since he was sixteen. After he and Lyman met in college and married, they went to a festival and watched people in kilts throw heavy things around. At the next festival they attended, Lyman signed up to compete and Todd cheered her on. So began a lifelong hobby. 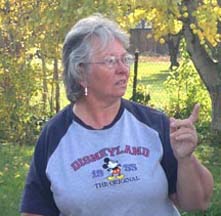 Cynthia Anne Johnson espouses learning through Newspapers In Education, healing through Native American flute, and appreciating the wonders of creation in all things. Cynthia is published in the Congressional Record, many newspapers, a couple of magazines and has written a book, A Glass Half Full. She also writes newsletter columns.
View all posts by Cynthia Anne Johnson →
ORDER BY MAIL