The Most Beautiful Thing

Posted on by Brody Barrus

In the Most Beautiful Place

Every bend of the South Fork of the Snake River as it slithers and cuts through eastern Idaho bleeds beauty. Tall luscious cottonwoods tower over the river, providing a home to hundreds of bald eagles. If I’m lucky, I may catch a glimpse of a mature bald eagle diving toward the water like a kamikaze pilot, only to pull up at the last second, grasping onto an unsuspecting trout with its razor-sharp talons. Below the cover of the cottonwoods, whitetail deer and shiras or Yellowstone moose thrive. On occasion, I see them along the banks getting a drink of water or going for an afternoon swim. Throughout the canyon section, the willowy banks abruptly transition to sky-high cliffs. When I gaze upon those cliffs, I sometimes begin to feel almost hypnotized by the thousands of swallows that flutter about like a cloud of mosquitoes. The South Fork is so rich with beauty, it is truly difficult to take it all in at once.

Below the surface of the river, prowling the depths in search of hatching flies, worms, or perhaps a school of minnows, is what I consider to be the purest form of beauty to be found: trout. The South Fork is home to several different species of trout: brown, cutthroat, rainbow, and the occasional lake trout. After hundreds of trips down the river catching thousands of fish, I have become particularly obsessed with brown trout. They are as tough as a mule, meaner than a two-headed snake, sly as a fox, yet also are one of the most beautiful works of art Earth has to offer. 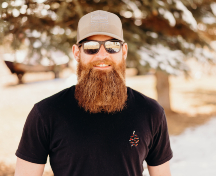 Brody Barrus is a lifelong Idahoan and avid outdoorsman. He separated from the United States Army in March 2020 and is currently a freshman at Idaho State University. He spends most of his downtime on the many streams, rivers, and lakes Idaho has to offer, in pursuit of trophy trout.
View all posts by Brody Barrus →
ORDER BY MAIL