The Thrill Is Strong

Posted on by Clark G. Ballard

Loved and Left, but Not Forgotten

The affair started in 1952 when my older brother Claude, then a sophomore at Camas County High School in Fairfield, paid fifty dollars for a 1929 Model A Ford Coupe that had definitely seen better days. The top had been replaced with a piece of olive-drab canvas that had a large hole in it where the rear window would go if she had one. Her headlights didn’t work, she had a rat’s nest of wires under the hood, and the wheels were mismatched with four bald tires. It was the first car in our family other than my parent’s car, and as a sixth-grader, I thought she was beautiful.

The first thing we did was fasten some old tent canvas in place of a back window. The canvas top was then painted white, which made a big aesthetic improvement to the Model A’s faded black paint. Against all odds, the engine ran like a top and the radiator held water reasonably well, if a can of Stop-Leak was added regularly.

The leaking radiator led to the first crisis with the new car in our family. Because it wouldn’t hold anti-freeze, in the winter Claude had to fill the radiator with water and place a piece of cardboard in front so it wouldn’t freeze while driving. When he parked for any length of time, the water had to be drained or it would freeze and ruin the engine. 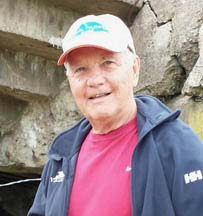 Clark G. Ballard is a Fairfield native who has lived in Florida for more than twenty-five years, currently in Vero Beach. He still considers himself an Idahoan temporarily living in Florida. A Vietnam veteran, he is a retired producer, director, and cameraman in the non-theatrical film and video field.
View all posts by Clark G. Ballard →
ORDER BY MAIL