Posted on by Faith Rudebusch

Eat or Be Eaten

Story and Photos by Faith Rudebusch

On hands and knees, I pulled the cheatgrass wedged against the garden fence, methodically checking for holes in the steel mesh.

A hawk circled overhead, its eerie cry echoing through the hills. I made my way around the hundred-foot perimeter of my vegetable garden, which is perched in the foothills south of Pocatello. An eight-foot-high pasture fence discourages the deer, while steel mesh stretches two feet underground to one foot above the ground.

Excessive? Perhaps, I thought, during a two-week period devoted to digging the ditch to bury the steel mesh. Certainly, I thought, as I tallied the cost of the materials. Absolutely not, I decided, as I surveyed the vole-riddled hillside below.

Voles are pretty cute, for rodents. I first made their acquaintance during a months-long research trip to Alaska during graduate school. There, on the tundra of an Aleutian island long abandoned by humans, we became rather intimate, as they insisted on burrowing underneath my tent. The voles were generally polite downstairs tenants, quiet and respectful. As good neighbors should, they abstained from nibbling on my tent’s ground cloth, although I was never sure how many generations were squatting there. I certainly preferred them to the foxes, who periodically sprayed our tents with urine—which stinks, in case you’ve never had the pleasure. 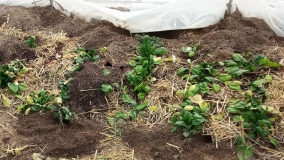 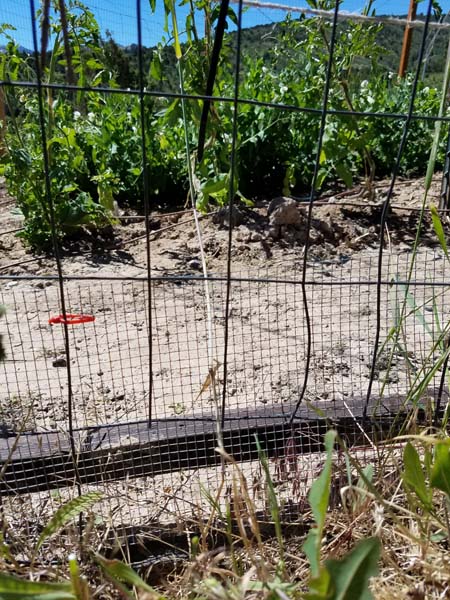 The author's spinach, destroyed by voles. 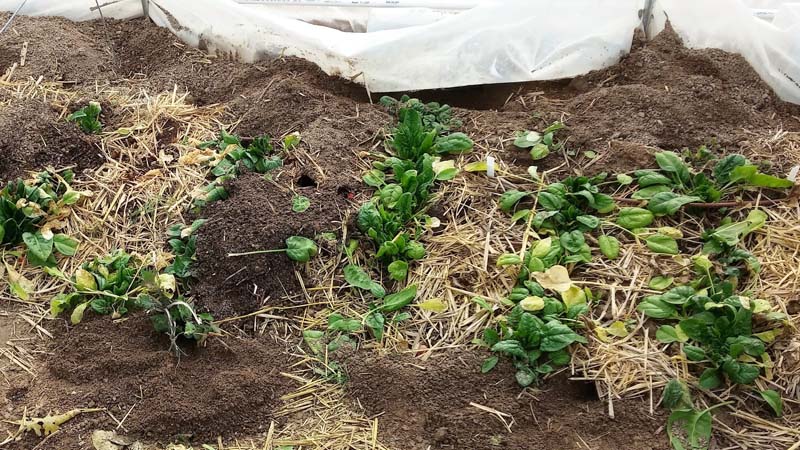 In Alaska, we created a detailed food web, a kind of map of predators and prey. In this map, lines connect animals to what they eat—many, many lines connected to voles. While voles themselves mostly dine on plant roots, stems, and the occasional insect, there are very few predators that would turn down a juicy vole. Here in Idaho, they are a staple food source for raptors such as owls and hawks, as well as foxes, bobcats, badgers, coyotes, and snakes. Remove the voles, and the predators starve.

While voles would love to sink their teeth into the vegetables of my Idaho garden, they are poor climbers: hence the steel mesh. Even six inches of mesh is too much for them to scale, differentiating them from their cousins, the field mice, who sprint over the mesh at full speed to reach my strawberries.

My fence’s validation came several years after its construction, via a stealth attack in the dead of winter. The spinach, carrots, kale, and lettuce snuggled innocently under their blankets in the hoop house, waiting to be harvested. They weren’t my primary concern, since I’d just given birth to my second daughter and wasn’t enthusiastic about digging the snow from around the hoop house door to check on them. But I was dreaming of delicious harvests every time I looked out at the white landscape, and I was full of anticipation when I finally ventured out to see how my green babies had fared during my absence.

At first glance, everything looked fine. The soil was damp, the hoop house plastic was holding up under the weight of the snow, and the spinach leaves were crisp and green. Unfortunately, they were no longer attached to anything: their roots and stems had been devoured.

It’s what I’ve always feared, I thought: enough of the voles have survived that they’ve piled themselves against the fence and are climbing over their relatives’ bodies to reach the promised land of spinach and kale. Vole populations boom and bust every few years, and this was a boom year: voles were everywhere. During boom summers, the trails are littered with vole carcasses run over by mountain bikes. While out walking, I have accidentally stepped on running voles. And they don’t hibernate: when the snow melts on south-facing slopes, brand new vole encampments are revealed.

I salvaged a few carrots while I stewed over my options . . . a higher fence? Embedded with razors? And guarded by those three mountain lions previously spotted loitering in our yard?

When the snow melted (and my in-laws were in town, monopolizing the baby and her sister), I got around to inspecting my fence. Vole runs surrounded three sides of the garden, but the voles weren’t climbing my fence. Instead, trails of droppings indicated only three doorways into the garden: two walnut-sized holes in the fence and a stick leaning against the fence, making a kind of ramp. I patched the holes and cleared the weeds from around the fence, and my husband Rick (who is assigned only unpleasant garden chores), trapped the voles in time for spring planting. Seven or eight of them had managed to get in, enough to eat my entire winter garden.

Predictably, the vole population declined the following winter. Once my garden was safe, I recalled that these short-lived, fast-breeding fuzz balls are the bread and butter of countless animals. The hawks’ cry, the scent of the nearby foxes, a bobcat’s footprints in new snow, these remnants of wilderness are as dependent on voles as we humans are dependent on our potato fields. So I watched the voles’ progress through the sagebrush-strewn hill below my garden with benevolent curiosity, noting the architectural changes to their runs as their numbers waxed and waned, just as they did long before the first humans ever set foot in these hills.

And the garden? So far, the voles haven’t breached the fence again. Eventually, I lapsed into complacency, congratulating myself on my impenetrable fence. Until two summers later, when the pocket gophers arrived . . . but that’s another story. 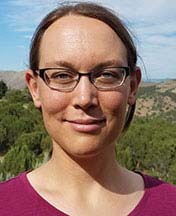 Faith Rudebusch fell in love with Idaho while attending Idaho State University, and stayed in Pocatello to teach high school science. She enjoys growing vegetables year-round, blogging at slatemountaingarden.com, trail running in the Idaho mountains, and playing with her two children.
View all posts by Faith Rudebusch →