Posted on by Janice Stevenor Dale

In the summer of 2014, the Boise Columbian Club received an intriguing phone call from Alex Davis, a board member of the nonprofit center for writers and readers called The Cabin. As vice president of the Columbian Club, I went with our then-president, Mary Lou Hobson, to meet Alex at her home on Warm Springs Avenue. Sitting by the pool, Mary Lou and I could hardly contain our enthusiasm for the project Alex described, which was in its formative stages. She called it the “White City Gala.” Immediately, we knew it was a perfect fit for our organization—not just because our definition of service is to help another charity achieve new heights in fundraising and community outreach, but because this particular project fit beautifully with the story of our own organization.

Alex explained that Erik Larson, the author of the 2003 best-selling book, The Devil in the White City, would speak at The Cabin’s 2014 fundraiser. The book is set during the 1893 Chicago World’s Fair: Columbian Exhibition, so named because it commemorated the four hundredth anniversary of Columbus’s discovery of America. This fair sparked the founding of the Boise Columbian Club, whose members attended it to ensure that displays, art, formal tea, and Idaho hospitality prevailed in the Idaho Pavilion.

That coincidence was compelling enough, but the challenge Alex presented to us was to create the architectural mass and feeling, the exoticism and enormity of the 1893 world’s fair, on the stage of the Morrison Center as the backdrop to Larson’s presentation—and to do it on a shoestring budget. 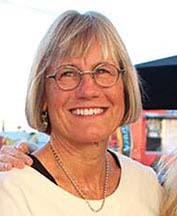 Janice Stevenor Dale is a past vice president and active member of the Columbian Club. She is president of design firm J S D A Inc., which specializes in large-scale commercial offices, custom residences, and historic homes. Janice has served as a docent for the Chicago Architectural Foundation and the West Adams Historical Association in Los Angeles.
View all posts by Janice Stevenor Dale →