Posted on November 1, 2021 by Joshua Kiggins

This Town and Me

As a teenager, I had fairly typical teenage angst about where I lived. By age sixteen I’d been to a few big cities, obviously knew it all, and was over Pocatello. I couldn’t wait to graduate and move away. On the fast track outta my home town, I joined the Air Force after high school and figured I would see the world. My aim was to get as far away from Pocatello as possible, but of course I got stationed in Denver, about eight hours from home. At least it was the big city.

Life in the Air Force did allow me to travel the world a bit, but mostly it was within the United States. I’ve been to all fifty states, although I don’t count Michigan, because that was just the airport in Detroit. I’ve driven the U.S. coast-to-coast more than once and drove up through Canada. I still love traveling, and yet all this exploring contributed to an interesting outcome: I’ve grown to appreciate Pocatello.

The first time I returned home for a visit was exciting, At that point, I’d been away only five months but had begun my own life out in the world and knew that going back to Pocatello would feel different. Yet as I continued these visits, I found myself dreading each upcoming trip. I fell back into the apathy toward the town I had felt while growing up. I could neither comprehend nor enjoy the little things that actually make Pocatello great. It wasn’t until I hit my mid-twenties that I started to really see and appreciate the place. In part, this was because I began to realize the potential that each resident brought to the town. As I visited more and more, I started to think about how maybe I could find a way to move back and make a living, which I still intend to achieve. 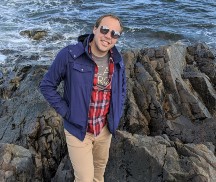 Joshua Kiggins was born and raised in Pocatello. He first left to join the Air Force and then spent a few years traveling the US and teaching high school. Currently living in Alexandria, Virginia, to attend a Master’s program in Washington D.C., he loves traveling and learning about community histories.
View all posts by Joshua Kiggins →
ORDER BY MAIL