Posted on by Josh White

A Student Learns about Sacrifice

I never thought history could become real. Yet through honoring a fallen World War II soldier from Idaho and delivering a eulogy at his grave, his story became real to me.

His sacrifice took on meaning. It made me realize that the sacrifices of all soldiers in all wars have meaning, and that researching and understanding these sacrifices can make their stories known in the world.

My experience researching history began in my freshman year at Renaissance High School in Meridian, during a class called “Research and Communications in the 21st Century,” taught by Janelle Gilson. I was tasked with creating a project for National History Day (NHD). In this competition, each student creates a project about a person or event in history that connects to that year’s theme. The project could be a website, a paper, an exhibit, a performance, or a documentary. In 2016, my first year competing in NHD, the theme was “Exploration, Encounter and Exchange in History,” and for my project, I decided to create a documentary about the California Gold Rush. I passionately spent hours upon hours outside class creating my documentary. I had the option of entering the project into the competition, and as I got invested in it, I wanted to compete.

In search of someone to interview for my documentary, I contacted the Idaho Museum of Mining and Geology, whose personnel connected me to Jerry Branson, a miner’s son and a member of the Idaho State Historical Society. At the Idaho State Archives, I interviewed him about the California Gold Rush, during which I also learned about the Boise Basin Gold Rush, and saw pictures from the local archives. After several months of work, I was ready to present my documentary in class. Mrs. Gilson enjoyed the result and became eager for me to compete on the local level. But the contest wouldn’t start for more than a half-year, so I had some waiting to do. 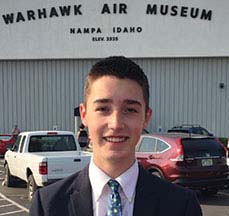