Posted on by Martha Green

On January 26, 2010 at our ranch in Plummer, the time had arrived for our cows to be experiencing the miracle of life by giving birth to their calves. When calving time came, every cow’s udder would ﬁll up with colostrum and the birthing canal would soften in preparation for receiving the new arrival. In February and March, these mothers would show off their  babies, each mother perhaps believing hers was more magniﬁcent than the others. For a brief time, no one or thing would dare to touch her calf, especially when it was newborn, because a cow’s defensive motherly instinct is to protect her offspring with her life.

At night, the trees in the forest nearby swayed back and forth as the southerly wind and rain tore at their branches. The cattle bemoaned the situation as they found some protection by backing up against the barn. My daughter Wendy checked them, making sure no cow was even thinking of having a calf in this weather. The force of the wind hastened her trip back to the house. The rain had soaked her from top to bottom and once inside, she said the warmth of the house felt so good.

Early the next morning, Wendy left for her job in Spokane. She would not be back until dark, and she checked the cows before leaving. Even so, I reflected that sometimes a cow doesn’t give you a clue that she has decided to calve. I thought, why don’t I just go down and look for myself? Being seventy-seven years old at the time, with poor balance, this wasn’t the best of ideas. My dear daughter (bless her heart) would strangle me if she knew what I was contemplating doing.

The calving pasture was not far from the house, so when I ventured down to take care of the chickens, I just kept on going to check the cows. I counted and then recounted them to make sure I didn’t miss any—but I had. Looking past a rise on the ground lay a black cow with a red calf lying beside her. The mother already had licked and dried off the calf as best she could. Everything looked normal, so I turned around and went back to the house. I knew Wendy would be surprised by this cow, which went by the identifier R4, as she wasn’t due to calve for another two weeks. 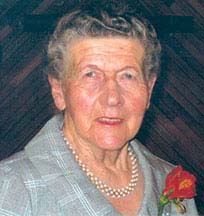 Martha Green says eighty-five years are gone but memories still tell the tales: cows milked before the school bus came, learning to artificially inseminate Simmental cattle, doing the doctoring for a large dairy operation, driving the wheat truck during harvest, raising six kids and losing one along the way, buying and selling two farms. Now retired, Martha does what she is “gifted to do“: writing letters of encouragement to those in need.
View all posts by Martha Green →