In the early 1980s, when I served as pastor of St. Catherine’s Parish in Kamiah, I met two retired men who had operated businesses in Kooskia and who also had something else in common. Herb Foltz had a gas station where the roads create a “Y” in Kooskia. When I met Herb, he was living outside Harpster between the Harpsters Bridge and the Mount Idaho Bridge. Ray Gilroy operated a hard goods store in Kooskia. In the 1980s, he lived up the Glenwood Grade. I was fascinated to learn that during their careers, both these men had accepted fence posts in trade credit toward purchases at their stores. Herb told me he allowed a customer six cents per post. Ray allowed five cents.

A person wanting goods from either businessman could make posts, take them to the business, and swap them for credit toward a purchase. Say gas was 19 cents per gallon in 1935, when Herb was in business. Three posts would get you almost a gallon. A pound of coffee was roughly five posts.

Ray owned the land south of Kooskia where the grass airstrip is now. He told me at one time he had more than a million fence posts stacked on the property. In a way, he became the bank for fence posts. He sold them by the truckload to “outsiders,” meaning anyone from anywhere who needed lots of fence posts. His customers paid in cash, something the area was lacking. With the revenue, Ray replenished the goods in his store, which thrived. Eventually, his daughter and son-in-law purchased the business. 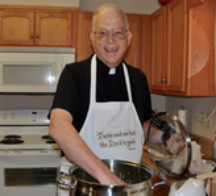 Tom Loucks lives in a small Boise retirement community for Catholic priests. He enjoys substituting for active priests who are vacationing or in educational pursuits. Currently he is working with a historic preservation project for Silver City’s Our Lady of Tears Church. A graduate of the University of Idaho in 1970, Tom loves history, religion, politics and pinochle.
View all posts by Tom Loucks →
ORDER BY MAIL